How to Donate Crypto to Ukraine? 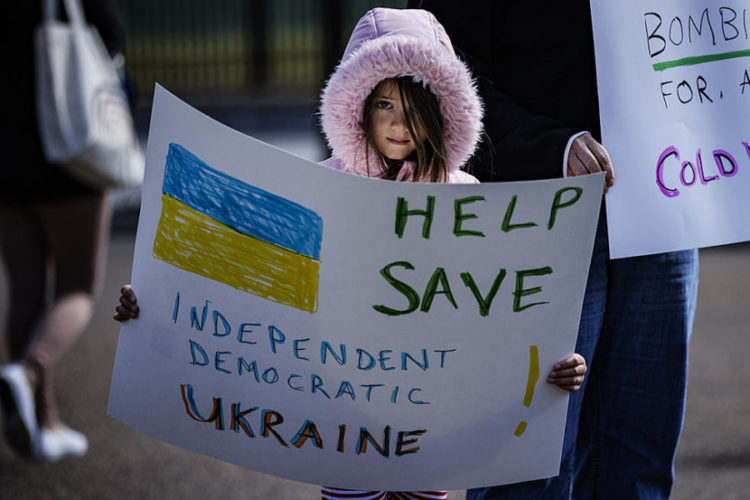 The world will never be the same: the limits of what is possible have expanded for everyone. On February 24, putin and his Russian forces invaded Ukraine, violating every conceivable and unimaginable law of war, peacetime, and human existence. The whole world, after the initial shock, supported Ukraine, demonstrating a hitherto unknown degree of unity and support on many levels. People, organizations, countries, and unions are trying in every possible way to help the Ukrainian army to stop putin and save the lives of civilians.

This war (which many call World War 3) has changed society’s attitude towards virtual assets. Today the crypto community provides invaluable support and donates Bitcoin to Ukraine. According to official information, the world has already donated crypto to Ukraine in the amount of about $53 million. Further, we will tell in detail how to help Ukraine in crypto.

For a deeper understanding of what is happening in Ukraine and why the whole world has united in a stand against putin, it is worth taking a look at the events of the last 2 weeks. Perhaps no one has any illusions about putin’s real plans to take over Ukraine.  Russia invaded Ukraine and this is called “war in Ukraine”, not “conflict” or “military offensive” (as, according to some reports, the UN is trying to mitigate the negativity).

The war in Ukraine-2022 began after the military tension on the borders with Ukraine and unsuccessful attempts to restrain putin with all the powers of European and American diplomacy. 24.02.2022 at 04:55 putin declared start of a “special operation”. And an hour later there were explosions in several Ukrainian cities (Kyiv, Kharkiv, Odessa, Ivano-Frankivsk, Khmelnytskyi).

Then putin invaded Ukraine across the borders of Russia and Belorussia, using artillery and heavy weaponry.

However, the war in Ukraine did not end in a planned blitzkrieg for the Kremlin but promises to develop into a protracted confrontation. For despite the numerical superiority of the enemy, the Ukrainian defenders greatly outnumber their enemies in spirit, unity, motivation, and terrain awareness. putin began the invasion of Ukraine by attempting a swift capture of Kyiv and the territories of the Luhansk and Donetsk regions. Zmeiniy Island and the Kakhovka GES were also seized.

All this is followed by the brutal smashing of the cities of Kharkiv, Sumy, Chernihiv, Kyiv, Mariupol, Volnovakha, Odesa, and many others. Enemy missiles and Grads explode residential areas, critical infrastructure, and administrative buildings. People are either killed or left without a roof over their heads, without water, food, medical care, or the ability to get out of destroyed cities.

The Parliament Commissioner for Human Rights noted that the actions of the aggressor and the opening of fire on civilians violate international law, the UN Charter, the Geneva Convention on the Rules of War, and the European Convention for the Protection of Human Rights and Fundamental Freedoms. The occupiers seized the Chernobyl and Zaporizhzhya nuclear power plants. These horrible and irresponsible acts can threaten the whole world with an ecological disaster on an unprecedented scale, ten times greater than Chernobyl 1986.

The war in Ukraine today looks like a total violation of all laws of war and morality. In many defeated cities there is a humanitarian disaster, hundreds of civilians, including children, are dying without the possibility of escape. Active fighting is now taking place in the east, south, and north of the country. The plan to seize Kyiv remains in force but has not yet been realized.

What will help Ukraine stand, fight, and win?

Ukraine was attacked by a state with one of the largest and strongest armies in the world. And for two weeks now Ukraine has been able to hold back the onslaught of Russian troops, and sometimes even to push them back. There are many reasons for this – from poor logistics and demoralization of the enemy to incorrect strategic planning of the invader.

But the main reason seems to be the unexpectedly powerful response of the Ukrainian defenders, backed by weapons, financial and technical assistance, and the emotional support of their people and the world community. Without such reinforcements, the Ukrainian army would certainly have fought to the last man, but its margin of safety would have been much lower.

There are many ways to help the Ukrainian army and civilians affected by the ruthless bombing of cities: finances, logistics, search and provision of necessary goods, transportation, organization of accommodation for evacuated people, and many others.

To simplify the provision of financial assistance, Ukraine, as a crypto-friendly country, accepts donations in cryptocurrency. This is handy because you can donate quickly, anonymously, and without intermediaries. Everyone who has crypto wallets can donate to the Ukrainian army or for humanitarian purposes.

Cryptocurrency donations can not be considered as a full-fledged alternative to traditional financial aid. But cryptocurrency solves a number of issues, for example, of reputational nature (when people or organizations cannot donate openly to military purposes).

Kuna became one of the first crypto exchanges, which helps to donate to Ukraine.

The Aid for Ukraine foundation, created by Everstake with the support of Solana blockchain, transfers the collected cryptocurrency to the official army and humanitarian aid accounts. Aid for Ukraine has connected the FTX exchange to the conversion process. It converts the cryptocurrency into fiat – dollar or hryvnia – and sends it to the accounts of the Ministry of Finance or the National Bank of Ukraine.

Ukrainian company 4ireLabs released a collection of NFT on the topic of the Russian invasion, the fight for the freedom of Ukraine, and peace to raise funds to support the Ukrainian army. The collection is created on the NEAR blockchain and is designed for its community.

Also, founders and participants of Ukrainian and foreign crypto-projects (NEAR, Hacke, Allbridge) created the Unchain Fund. The Fund raises funds in cryptocurrency and fiat, coordinates humanitarian aid, helps with the evacuation of people, and supports civilians.

UkraineDAO also uses the power of web3 tech and community to raise funds for Ukrainian organisations that are helping those suffering from the war in Ukraine.

How to Help Ukraine in Crypto?

If you have a cryptocurrency wallet, you can help Ukraine army or civilians by transferring cryptodonates to the addresses below. The Ministry of Digital Transformation clarified how to help Ukraine military and published a list of official wallets for cryptodonates.

In addition, the website of Ukraine Now offers information on how to help Ukraine army by providing financial support in cryptocurrency.

Volunteer organization “Come back alive” also accepts donations in both traditional and cryptocurrency and constantly publishes reports on the money spent. You can help Ukraine army by transferring BTC, ETH, USDT, USDC.

UkraineDAO website has an Ethereum wallet address for transferring funds.

All mentioned above operations you can do with Trustee Wallet – multicurrency cryptocurrency wallet.

Project Aid for Ukraine accepts SOL or any SPL Token, including wrapped versions of ETH, BTC, UST, and others. NFT donations will also be accepted, and sold. In order to donate, you need to install one of the offered wallets.

How to donate with Trustee Wallet

We know that there are a lot of people who want to donate in cryptocurrency, but do not have a cryptocurrency wallet. Trustee Wallet development team works in Ukraine and  makes cryptocurrency donations easier. Thus any person can absolutely anonymously, without e-mail, registration and verification, buy cryptocurrency via his/her bank card and send it directly to the Fund that was created to help war victims.

To make a donation the user only needs to specify the fiat currency for which the purchase is made and its amount. Then the system of crypto wallet automatically sends an appropriate amount of cryptocurrency to the Fund. You can make such a donation using a link – https://trusteeglobal.com/stop-war-ukraine/.

How to donate safely

Foundation and charity executives recommend taking information only from official channels because of the thicket of scammers. Before transferring cryptocurrency to a charity’s wallet, make sure you are using addresses from the original site and not a clone.

Statistically, cryptocurrency donations are most often transferred by ordinary people in small amounts. However, foundations do try to keep track of the history of transferred funds. If they were previously used in the darknet, it will block their further use (you can read about “dirty” Bitcoins here).

Now when you know how to help Ukraine, you can join the powerful army of cryptodonators. Every coin can bring closer the hour of putin’s regime’s downfall.