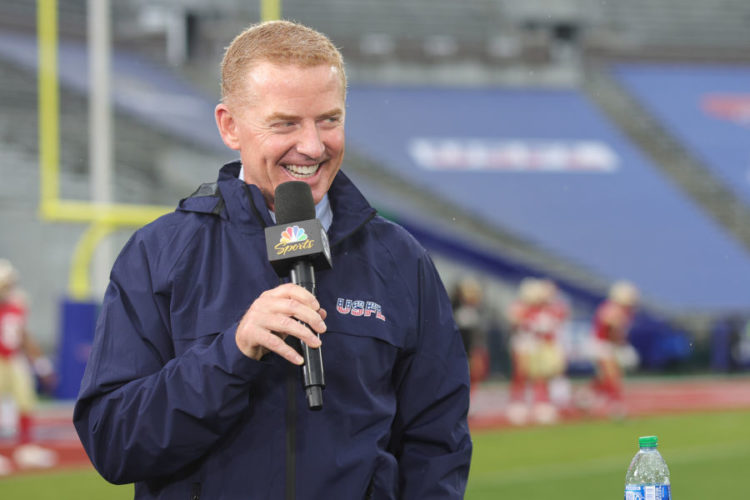 Jason Garrett is a familiar name in American Football. He is more famous as a coach than as a player. He joined the Dallas Cowboys in 2007 as offensive coordinator. In that season he guided the Cowboys to the second-best offense in the NFL. His performance made him an attractive head coach prospect. In fact, he received offers from Baltimore Ravens and Atlanta Falcons. But he denied leaving the Cowboys. As an assistant coach, Jason Garrett drew as high a  salary as $3 million in 2008.

As the head coach of the Cowboys, Jason Garrett garnered much success. Under his guidance, the Cowboys won the NFC East thrice. But recently, Jason made the headlines for a separate reason. It is being reported that NBC is considering him to replace Drew Brees as the analyst. Read this article to know more about this.

Drew Brees Stepped Down as The NBC Announcer

In 2021, Drew retired from the New Orleans Saints as a player. After that NBC hired him to work on the network’s studio show, Football Night in America. He, along with Mike Tirico, also called Notre Dame Fighting Irish football games. However, his stay with NBC had been a short one. He was a famed QB of his time. But his on-field performance does not go with his on-field effectiveness. Therefore, NBC and Drew parted ways after their first-year stint.

Thus, the network now has a vacancy that they are looking to fill up. Andrew Marchand of the New York Post reports that NBC is considering Jason Garrett as the possible replacement for Drew Brees.

Jason Garrett entered into the outfit of a coach, back in 2005. In 2010 he became the interim manager of the Dallas Cowboys. Later he was promoted to the post of head coach in 2011. During his ten years as the Cowboys’ head coach, he had a record of 85-67 in the regular season. He has a 2-3 record in the play-offs. In fact, he had been the Coach of the Year in 2016.

After parting ways with the Cowboys in 2020 he joined the New York Giants as their offensive coordinator. However, he was fired in 2021. At present, Jason Garrett is already working with NBC on its USFL coverage. There he works alongside Jac Collinsworth. Therefore, it will not be surprising if NBC decides to feature Jason as Drew’s replacement on Football Night in America.

In any popular sports rumors are common things. It is not always a player who will be at the center of such rumors. In fact, in the world of sports, rumors about coaches and even TV analysts abound. In a few cases, such rumors have turned out to be true. While in most other cases they were little more than nothing.

However, in the case of Jason Garrett, the rumor may turn out to be true. He has been working with NBC for some time. In fact, he has been quite successful as an analyst. Given the unpleasant experience that NBC had with Drew, they will be aiming to hire someone who has been tried and tested.

In this aspect, Jason seems to be a nice choice, as he is already working with NBC. However, NBC has refrained from making any comment on this issue. Thus, we need to wait and watch for any future developments on this issue.