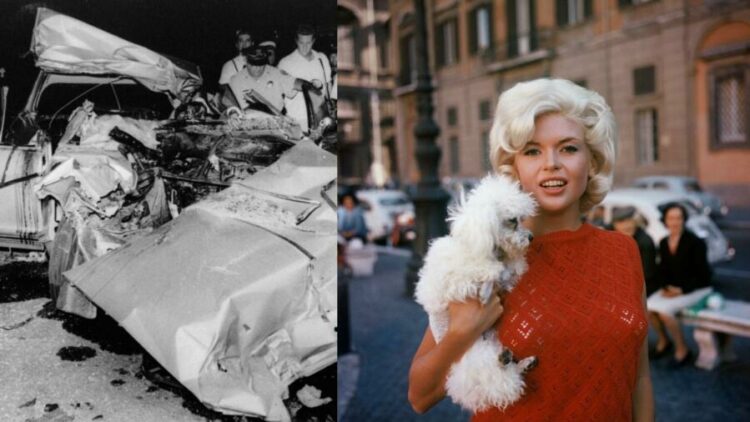 Even today, people feel about the horror car crash of Jayne Mansfield in June 1967. A fatal car accident beheaded the blonde bombshell actress Jayne Mansfield. Jayne Mansfield’s death was shocking and unacceptable truth among her fans. She was a young woman but died unfortunately in a fatal car crash.

Who was the Blonde Bombshell, Jayne?

Commonly, people call the sexy actress the blonde bombshell. Thus, Mansfield is not surprised to get this name for her sexy on-screen appearance. She came into the spotlight as a sexy cartoon alternative to Marilyn Monroe.

She was born on 19th April 1933, in Bryn Mawr, Pennsylvania. The actress was born to a school teacher and an attorney. Her birth name was Vera Jayne Palmer.

Her father died when she was just three years old. Jayne and her mother were riding in a car, and her father was driving then. Suddenly, her father got a heart attack, leading to a car accident. However, the young actress and her mother survived this car crash.

In 1939, Jayne’s mother married for the second time and shifted her family to Dallas. It is here where the actress met and fell in love with Paul Mansfield. On January 28, 1950, the couple got secretly married.

People came to know about her marriage when she became pregnant. On November 8, 1950, Jayne delivered a girl baby, Jayne Marie. But when Paul moved to his military job, Jayne left her family to move to California.

She entered the entertainment industry at the age of 21. While entering the Hollywood industry, she was already married and had kids. Moreover, the actress married and divorced thrice in her life. She also had five children out of her marriage. Furthermore, the actress had many affairs with celebrities.

Personal Life And Another Marriage Before Jayne Mansfield’s Death

On January 13, 1958, Jayne married a bodybuilder, Mickey Hargitay. Before their marriage, the Hungarian-born bodybuilder presented her with a new Spanish-style pink mansion. The highlight of this mansion was the heart-shaped swimming pool. Its present location is at 10100 Sunset Boulevard.

With Mickey, the actress had three children named

With her nude appearances in the movies, her husband began to hate her and kicked her out of his house. Then, in 1964, Jayne married a director, Matt Cimber.

She had one son, Anthony, with him, who was born in 1965. In 1966, Matt divorced her because of her alcohol addiction. But Jayne didn’t stop and began to date San Francisco attorney Samuel S, Brody.

Jayne enrolled at ULCA in 1953 and then got a chance to do a small role in the movie ‘Prehistoric Women.’ She even enrolled at Southern Methodist University to study acting skills. Jayne was adamant that she wanted to gain huge popularity in acting in movies.

Even her husband promised her to take Hollywood. However, it couldn’t happen; thus, Jayne put her effort into entering Hollywood. Warner Bros noticed her talents and gave her a chance.

The actress signed Warner Bros Studio, and she exposed her talent at the Pasadena Playhouse. Then, she styled her hair blonde and started focusing on her career. But it led to her divorce from her first husband in 1958.

Jayne began to act sexy and exposed her assets in most acting. She even posed nude in the ‘1955 Playboy Playmate of the Mouth.’ This gained so many negative comments about her, but still, she didn’t care about it. Then, she got a chance to do a lead role in a Broadway Sex Comedy named ‘Will Success Spoil Rock Hunter.’

Then in 1958, Jayne signed with 20th Century Fox Studios. With this studio, she did one of the best movies,’ The Girl Can’t Help It.’ Again she made her nude appearance in the movie, ‘Promises, Promises.’ Likewise, she appeared in many movies in sexy and bold roles.

On June 29, 1967, Jayne left Biloxi to reach New Orleans in the early morning. She went with her boyfriend, Samuel S. Brody, and three of her children. Her children slept in the backseat, and a driver, Ronald B. Harrison drove away from the car.

Around 2 AM, the 1966 Buick Electra suddenly crashed into the truck’s back. The driver didn’t see the truck because the mosquito controller truck pumped fog all over the place. With the Buick Electra crash, the top of the car almost broke. This incident killed all the people sitting in the front seat.

Then, the police rushed to the accident location and saved her three children. But the accident killed the three adults instantly. Even the actress’ dog died in this crash. So, the police informed the public about Jayne Mansfield’s death at the accident.

But this car crash incident began to have many rumors. According to some reports, the accident decapitated the actress, Jayne. Her wig was thrown away from the car, making people think it is her head. It is all because of the photos released after her death.

Based on the police report, it was clear that the upper portion of the actress’ head got severed. Even her death certificate confirmed that she suffered from a crushed skull.

There is another rumor about Jayne Mansfield’s death. The actress had an affair with the Church of Satan’s founder, Anton LaVey. Since she left her and dated Brody, LaVey cursed her to death. But there is no proof of this rumor. One can get a clear idea about this rumor in a 2017 documentary, “Mansfield 66/67.”

It has been fifty years after her death, but Jayne still fascinates the people. She was popular among her fans, who didn’t believe her bold and sexy acting in the 1950s. So, this is all about the late actress Jayne’s profession and tragic death.

Also read: The True Story Behind The Death of Famous Comedian, Chris Farley