Johnny Gosch Vanished in 1982: Know About The Complete Incident 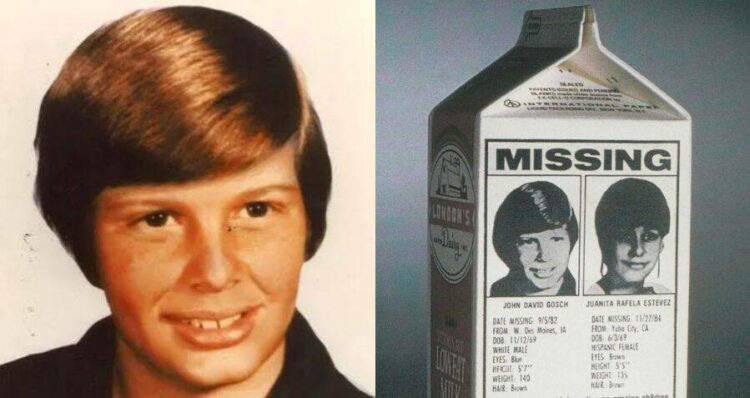 Twelve-year-old Johnny Gosch rose early on September 5, 1982, to deliver newspapers to his West Des Moines, Iowa, neighborhood. Around 6 a.m., he was seen by his fellow paperboys near his house with a cart full of delivery, but Gosch never made it there.

Only the small boy’s tiny red wagon indicated his presence. Several witnesses claimed to have seen him giving directions to an odd man in a blue car. But authorities first believed the victim had merely fled, allowing his abductor plenty of time to flee.

There were no clear leads to follow even after the search for Gosch began in earnest. Consequently, when a second youngster vanished under suspiciously identical circumstances two years later, a fellow Des Moines local had the brilliant idea to print the boys’ images on milk cartons from a nearby dairy. This quickly led to a nationwide push to highlight missing child information on milk cartons.

Know About The Sudden Disappearance of Johnny Gosch

To deliver newspapers in West Des Moines, Iowa, on September 5 1982, Johnny Gosch rose before dawn. He was accompanied by his dachshund, Gretchen. According to Iowa Cold Cases, his father generally accompanied him, but on that fateful Sunday morning, John David Gosch decided to stay home.

An irritated neighbor wondering why his newspaper hadn’t been brought yet called the Gosch household at around 7:45 a.m. Young Gosch ought to finish his course by this point, which was strange.

In a hurry, John Gosch began looking around the area for his kid. John and his wife immediately called the local police. According to the law, the police must wait 72 hours before declaring Johnny Gosch missing and starting a search for him.

But they presumed he had escaped because there had been no message or demand for ransom. But Gosch’s parents were aware that there was a serious problem.

A terrifying sequence of events started to take shape when police finally started investigating Johnny Gosch’s disappearance. Other paperboys who worked that morning alongside Gosch said they saw him conversing with a man in a blue Ford Fairmont at around 6.

Further, Noreen described what the witnesses told her about the incident: “The guy switched off his motor, opened the passenger door, and dangled his feet out on the curb precisely where the guys gather their newspapers.”

She claimed the stranger asked her son for directions and that young Gosch began to walk away after speaking with him.

According to Noreen, the man started the engine, pulled the door shut, and turned the dome light three times before exiting. She thinks he was pointing at another man who came out from between two homes and started following Gosch.

However, everyone had different takes on this. Also, no one could exactly remember that unknown man or his car. So, the cops and investigation team had little detail about him. When Gosch’s parents saw that the law was not taking proper actions to find their son, they decided to investigate the scene independently.

Following this, John and Noreen distributed around 10000+ posters with their son’s picture printed. They thought it would help them to find their beloved son.

After hearing this news, one of Martin’s relatives showed his desire to print Gosch, Martin, and photos of other children missing from that area on the milk cartons. Further, soon this idea spread across the country.

Alleged Sightings of Johnny Gosch Over The Years

Since Johnny Gosch disappeared, many people from different countries claimed that they had seen Gosch. But we don’t know if this rumor is true or not.

Also, Noreen even said that she saw Gosch at her house. She claimed to see him almost 15 years after he vanished. In March 1997, at 2:30 a.m., Noreen Gosch heard a tap on her door.

When she opened the door, she saw a strange man standing next to Johnny Gosch, who was then 27 years old. Noreen claimed that her kid unbuttoned his shirt to show a distinctive birthmark and talked to her for more than an hour.

Later, she admitted to The Des Moines Register, “He was with another man, but I don’t know who he was. Johnny would turn to face the other person to get permission to talk. Also, he gave no information regarding his residence.

Noreen claims that Gosch urged her not to call the police since doing so would risk both of their lives. She further says that he was sold to a child sex trafficking network. An odd parcel that suddenly appeared outside her door almost ten years later seemed to support her claims. Let’s see what it is about!

In September of that year, nearly 24 years after Gosch vanished, Noreen discovered an envelope on her doorstep with three images of several guys, all tied up. One of the boys looked precisely like Johnny Gosch.

While investigating the images’ origins, the police found that they weren’t actually of Gosch. But Noreen finds that hard to believe. She continued to believe that her boy, Gosch, was forced into a paedophile ring. Was she right? Let’s see!

In 1985, Noreen received a letter from an unknown man from Michigan. He wrote that his motorcycle club abducted Gosch to use the kid as an enslaved child. They also demanded a hefty amount to release the boy.

Claiming all these facts true, Paul Bonacci, in 1989, told his attorney that he abducted Gosch and forced him into sex work.

Low passed the Johnny Gosch Bill in 1984. This bill asked the cops and authorities to investigate the missing children’s cases immediately and not to wait for 72 hours. Noreen’s dedication and hard work ensured that these missing child cases solve as soon as possible.

Though the cops couldn’t find Johnny Gosch, this incident saved the lives of many children.

Also read: Who was Johnny Michael Allen? Why did Cyntoia Brown Long Shot Him?