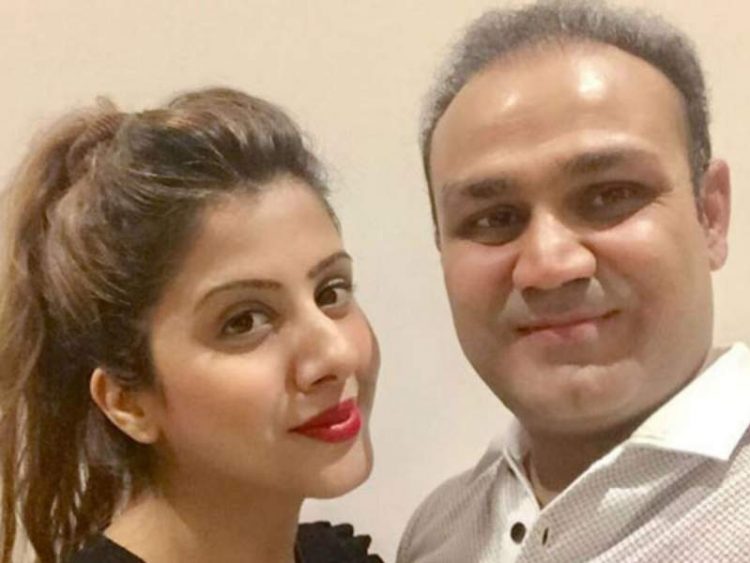 Knowing about the romance story of our favourite cricket players is a good pass time. Some of the love stories of the players are very interesting and make us believe in the idea of love at first sight. The talented cricket player Virender Sehwag got bowled over when he saw Aarti Ahlawat. Know about their romantic story here. Their story will melt your heart and make you fall in love with love itself. Continue reading to know more information about the adoring husband and wife and their first meeting.

Virender Sehwag is a well-known cricketer who played for the Indian cricket team. His age is now forty-two. He played as a right-handed batsman and was popular for his contributions to the team. His birthplace is Najafgarh, Delhi and his birth date is 20 October 1978. Moreover he comes from Jat family and his family was large. His international career is immense and he has an impeccable record.

On the other hand Aarti Ahlawat is a businesswoman. She is one of the partners in a large agro-based business. So she is also successfully handling the business and receiving lot of profits.

How did he meet his wife Aarti Ahlawat?

Virender Sehwag was twenty-one years old when he proposed to Aarti Ahlawat. They maintained their relationship for five years before getting married. But before going into all the details about their relationship let’s hear how they met.

The couple met for the first time when they were little at the wedding ceremony of their close relations. They became playmates and stayed as friends. They grew up and their friendship became stronger and deeper. We know for sure that Sehwag came to have feelings for Aarti at first. But he did not reveal his feelings to her and kept it a secret for some years.

Then when he turned twenty-one he proposed to her because he was not able to contain his love. They knew each other for fourteen years before the proposal. His proposal was simple yet effective. Eventhough he is a silent guy he was not shy to reveal his true feelings to his lady love. Then Aarti said yes to his proposal and their relationship began.

They waited three years for their wedding as they dated for some time. Bu their parents did not know that there were in love so the lovers had to break the news to them. At first, their parents were hesitant to accept their decision however they accepted in the end. The couple must have shown how much they loved each other for their parents to accept their relationship and give them their blessings. At last, the wedding date got set on April 22, 2004. It was a happy day for the lovely couple.

The couple’s wedding took place in the home of Mr Arun Jaitley with a lot of security. It was a family affair so no media people received entry inside. The guests had to show the wedding invitation to enter inside. Everything happened in an organised way. In this beautiful ceremony, the couple tied their knots and became bonded for life.

The wedding followed the theme of Haryanvi. The bride donned pink Lehenga and the bridegroom designer Achkan. They both looked amazing. Then the wedding got followed by a grand reception planned at a five-star hotel. The wedding guests had a good time at the wedding as well as the reception. Many celebrities, sportspeople and famous personalities attended the wedding and wished the couple. It was a widely publicized affair of the year.

After enjoying their life together the couple had their first kid that furthered their happiness. His name is Aryavir and he came into the world in 2007 just two days after his father’s born day. Then in 2010, the couple had another son and they named him Vedant. Sehwag and his beautiful wife dote on their kids. Surely they are raising them as talented and responsible individuals like them.

Hope this swoon-worthy love story of Sehwag and Aarti will make you happy. They are one of the celebrity couples who like to keep their life private. Moroever, they are friends first and then husband and wife that makes their relationship unique and beautiful.