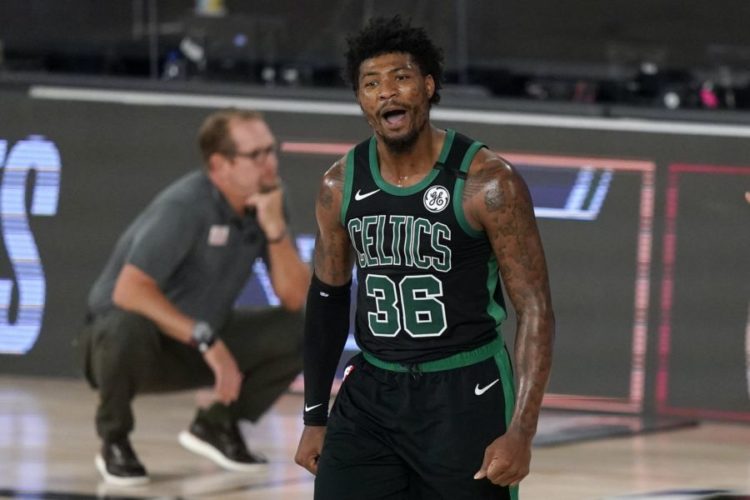 The world of sports is a highly professional world. Here, emotion finds a little space. Yet there are moments when the players cross the line between emotion and professionalism, thereby adding an emotional touch to the game. A recent statement by Marcus Smart can be an instance to the point. Smart admitted that he was unable to sleep for two nights following Game 5 against the Milwaukee Bucks. In the fourth quarter of the game, Boston Celtics took a stunning 14-point lead over the Bucks in the fourth quarter. But after 40 minutes of dazzling play, the Celtics collapsed.

However, in Game 6 the Celtics bounced back to level the series with the Bucks. Smart played an important role in helping his team to draw level with the Bucks and thereby set up the series finale Game 7 on Sunday. After the exciting Game 6, Marcus Smart made a statement that has become a topic of discussion among the fans. Whatever he said, is seen as nothing but the truth, by many. Read the article to know more about this.

This playoff series between the Bucks and the Celtics have been one of the most intense playoffs in the recent past. In every single game of the series, everything happened against the expectation of the audience. In the last two games, the Celtics got a 14-point lead in the fourth quarter. But of these two, they have won only once.

Before going into Game 6, Marcus Smart and the Celtics were aware of the importance of the game. They were also aware that they let the previous game slip out of their hands, thereby gifting the Bucks a lead in the series. They were unable to use the homecourt advantage in their favor. Thus in Game 6, the Celtics looked resolved. However, this time also their 14-point lead started dwindling. But they held on to the last, securing a nail-biting 108-95 victory.

After the win, Marcus Smart admitted that after two nights, he would be sleeping peacefully. Even Jason Tatum, who brought home 46 points, commented that the memory of Game 5 was still fresh. He added that in Game 6, he was aware that in the previous game, the Bucks were stronger in the fourth quarter of the game. This awareness helped them to keep the hold tight till the final seconds of the match.

Also read: The Donovan Race: Top 5 Teams That Might Lead The Race

In Game 6 Tatum emerged as the star performer. With 46 points, he emerged as the highest scorer in the game and sealed the game in the favour of the Celtics. However, it was Smart who started things off with 14 points in the opening quarter. At the end of the game, Smart had 21 points and 7 assists to his name.

At the end of the game, Marcus Smart boldly declared that he is the heart and soul of the team. He further added that his teammates always say to him that he sets the tone of the match and his energy level is contagious. Click on the link below to watch Smart’s interview:

The statement might appear cocky. But Smart was indeed telling the truth. In every single game for the Celtics, he gives his all. He has been the NBA Defensive Player of this season, for a reason. He guards the backline of the Celtics like a wall. Marcus Smart will do anything to get his team over the lines. Even outside the field, he is a true leader.

After an early-season game, he even criticized Tatum and Brown for being selfish with the ball. Maybe it was wrong to do so in public. But it seems that his words had the desired effect as they climbed to the No. 2 seed after a dreadful start to the Eastern Conference.

Marcus Smart’s statement might seem cocky. But the way he performs for the team, both on and out of the field, speaks for his importance to the team. Therefore, he seems to be right in claiming himself as the soul of the team. He indeed deserves that honor.