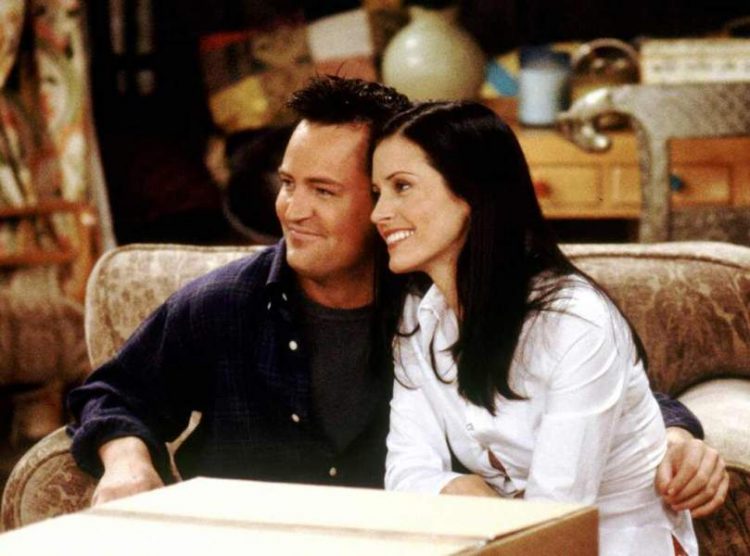 Matthew Perry and Courteney Cox played as the iconic characters Chandler Bing and Monica Geller in the popular sitcom “Friends“. The creators David Crane and Marta Kauffman thought about setting up Chandler and Monica in the series as they believed it will work out.  The rest is history because they become one of the popular couples in TV series. They were the perfect foil for each other.

We also have to say that Matthew Perry and Courtney Cox already had chemistry between them that suited the characters they played. Want to know more about their love story. Then continue reading because many interesting details are waiting for you.

Did Perry and Cox dated in real life?

Many rumours spread about the relationship between Perry and Cox when they acted as a couple on the show. The audience believed that they truly were dating because whenever Perry and Cox were seen together they looked like a couple. But this was only speculation and no confirmation came from the stars themselves. Then Cox got married to David Arquette that put an end to the speculation.

Although Perry and Cox were not romantically involved they stayed as friends in true life. Recently, Cox posted a picture of herself and Perry on Instagram. They met for lunch so still after so many years they are keeping in touch but only as good friends. At the moment Cox is in a relationship with singer and songwriter Johnny McDaid. Perry also confirmed that he is dating Molly Hurwitz. They are happy and content in their relationships.

Do you know that fifteen years ago Monica and Chandler married in a romantic wedding ceremony with their close friends and family? It was one of the famous episodes on Friends that made many people have tears of happiness. They have become the model couple for many. Here is the timeline that will help you to trace the events that led to their marriage.

As Chandler and Monica were long-time friends the story of them hooking up in London created quite a stir. Many audiences got thrilled by their sudden romance however they also wanted to know if it works out or not. But the couple decides to wait for some time before telling their friends. They hide their relationship for many months. The first to know about their relationship was surprisingly their dim-witted friend Joey. Their secret relationship led to many comical scenarios in the sitcom.

The couple’s engagement was also one of the best episodes on ‘Friends’. As Chandler was afraid to commit in a relationship this was a big milestone in his life. When he got down on one knee to propose to Monica it was very romantic and heart touching.

This was certainly a big day for Chandler and Monica. There were also some shocking moments in the episode. At the day of the wedding, Chandler runs away because of his commitment issues. But finally, he comes back and with help from his friends and marries his sweetheart.

These are some of the exciting information about the real and reel life relationships. Although many people expected Perry and Cox to start a real-life relationship it did not end up like the story in the sitcom. But we can be sure that their friendship is real and long-lasting.