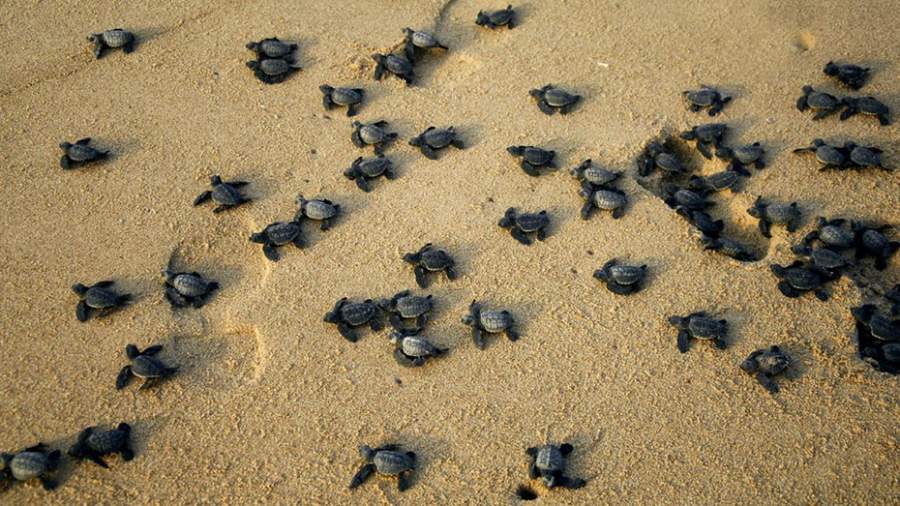 Amid COVID-19 grim, there’s good news for our planet. The endangered Olive Ridley in Odisha’s Rushikulya rookery has returned to Odisha’s shore for mass nesting. This is because there are no humans and tourist intrusion due to the lockdown.

As per the Forest Department, approximately 2, 78,502 mother turtles have become a part of the day-time nesting activity. Over 72,142 Olive Ridleys have arrived at the beach to dig nests and lay eggs.

The total number of turtles laying eggs till now is over 7.9 lakh. Mass nesting at Gahirmatha is over, it is still in continuation at Rushikulya. It is estimated that around six crore eggs will be laid this year. That’s good, right?

Also read: Jharkhand Is Motivating the Other States As It Stepped Down From Its Idea Of Building An Airport To Protect Elephant Corridor

While the forest department is also claiming that this year they have seen the highest number of turtles. During the last two years, we have seen a tremendous increase in mass nesting. And, this year, we have estimated that at least 4.75 lakh turtles came on to nest on Rushikulya beach.

Meanwhile, we are expecting some other good things to happen amid this pandemic spread that has shooked the entire nation and people around the world.

A number of Twitter users shared the happy news with the world.

ARRIBADA ~Spanish Word – means ‘Arrival’ ?
Refers to mass-nesting event when 1000s of Turtles come ashore at the same time to lay eggs on the same beach.
Interestingly, females return to the very same beach from where they first hatched, to lay their eggs.
?️ Olive Ridley Turtle pic.twitter.com/dvzslqA8zW

“Positive Impact of Coronavirus ” As the restriction imposed on mankind to stay at home & maintain the cleanliness, helped Olive Ridley Turtle to ashore for mass nesting in broad daylight at Gokhurkuda in Ganjam district pic.twitter.com/CuqxRFARTj

Thousands of olive ridley turtles nesting on the beaches of Odisha.
Their normal predators (humans) are in quarantine.
This season, their numbers will explode in the oceans.
There is a silver lining in this dark cloud after all. pic.twitter.com/l0DMLbGp4l

A Rare albino Olive Ridley. A forest guard watches over the beach..quiet, undisturbed, closer to what it may have been like millions of yrs ago. Pic: rabindranathsahu #turtles #Odisha @JustSeaTurtles @turtles @turtles_talk_back @ParveenKaswan@susantananda3 @ORP_INDIANOCEAN pic.twitter.com/ZJriMSk7YB

5 Ways to Be Safe on Your Sea-Side Holiday