Pete Maravich’s Assessment of Larry Bird As The “Very Best” 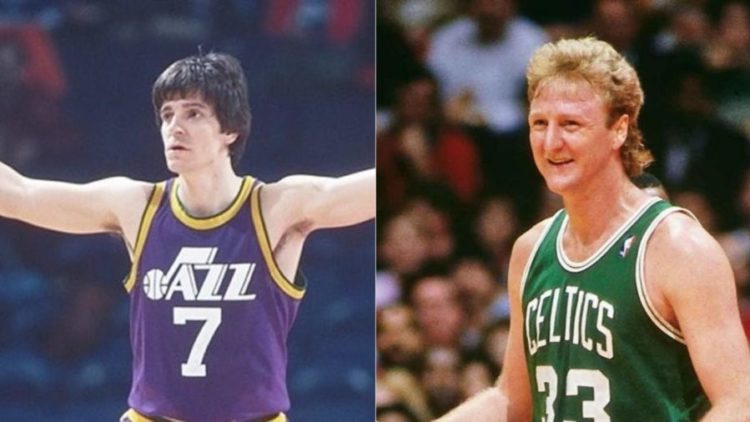 Pete Maravich is a name that any passionate NBA fan will recognize in an instance. Well, if you have not heard the name before, then the record books will introduce him. With 3,667 points scored and an average of 44.2 points per game Maravich is the all-time leading NCAA Division I scorer. In fact, he is one of the youngest players ever to be inducted into the  Naismith Memorial Basketball Hall of Fame. Moreover, he is considered one of the best ball handlers of all time.

However, an important fact is that during his final season with the Boston Celtics, Pete Maravich teamed up with Larry Bird. Larry was then a rookie. But the interesting part is that we tend to forget that these two greats once shared the same club outfit. However, they played together only for 35 games in the 1979-1980 season. But,  Larry seems to have impressed him even within such a short period of time.

Larry eventually went on to become one of the best players in the NBA. In fact, before his tragic death in 1988, Maravich called Larry the “very best” player in the NBA. Read the article to know more.

In 1980, Pete Maravich joined the Celtics. But by that time his game has dropped. He was far from the form which made him a five-time NBA All-Star, a four-time All-Pro selection, and a one-time scoring champion. Unfortunately, his knee injuries plagued his career. It kept him unfit most of the time. His scoring and passing abilities also got severely impaired since the 1978-79 season. Thus, with the Celtics too, he failed to make the mark.

On the other hand, Larry Bird had already emerged as the super-star Rookie. He started in a glorious form, averaging 21.3 points, 10.4 rebounds, 4.5 assists, and 1.7 steals. He even beat Magic Johnson to emerge as the NBA Rookie of the Year. Pete Maravich on the other hand made a contribution of 11.5 points per game off the bench in 26 regular-season games.

However, in that season, he participated in the postseason for the first time since 1973. In the first rounds of the playoffs, the Celtics defeated the Houston Rockets. However, they faced a crushing defeat at the hands of the Philadelphia 76er in the second round. With this, Maravich’s career came to an end, as his knee problem became intense.

Also read: Chase Claypool Speaks Up Against The Criticisms

The 1980 season became the last season for Pete Maravich in the NBA. His knees became worse than ever. His performance dropped to a stooping low. Thus he was forced to hang up his boots. On the other hand, the 1980s were the beginning days for Larry Bird. But he became an impactful player for the Celtics right from the beginning. In the 1981 season, he guided the Celtics to an NBA championship. In fact, two years later, Larry won the first of his three consecutive NBA MVP awards. During his streak, Larry also won two more championships, winning NBA Finals MVP both times.

During his Hall of Fame career, Larry averaged 24.3 points, 10.0 rebounds, and 6.3 assists per game. But he never topped these individual categories. The categories of average minutes played and free throw percentage are the only two categories in which Larry was the league leader. But, he is one of the best all-rounders in NBA history.

Pete Maravich was right when he called Larry Bird the “very best” in the NBA. It is true that Larry never topped the league in passing, dribbling or scoring. But he had been a top performer as an all-rounder. Therefore, Pete’s assessment of Bird seemed accurate.

Also Read: What Can Rich Strike Learn from Past Kentucky Derby Winners?