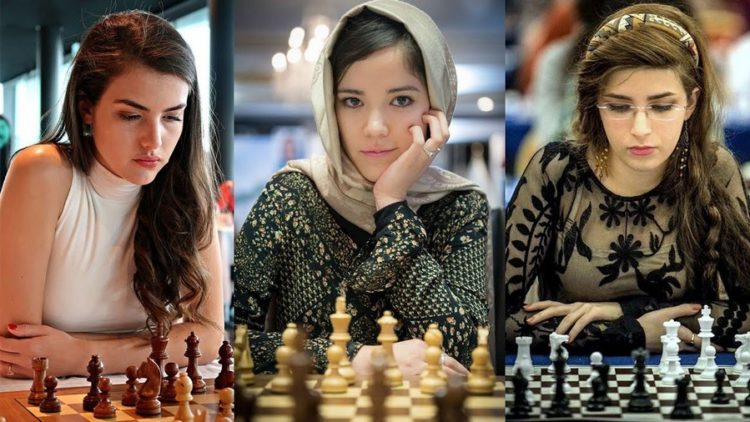 Often we have a wrong idea in our minds that men completely dominate chess. However, that is not true. Several female hot chess players are dominating this sport. They are constantly proving that people should recognise them for their good looks and their sharp brains. You will get a similar vibe if you watch the famous Netflix series Queen’s Gambit. Just like Anya Taylor Joy, in real life, too, there are several hot chess players who are winning our hearts with their beauty and intelligence in the world of chess.

So are you curious to know about them? Stay with us until the end if you want to check out the list of the top ten prettiest and hot chess players. Let us have a look!

Some of The Gorgeous Chess Players in the World

If you have developed an interest in chess after watching Queen’s Gambit, you would indeed be happy to know that several beautiful chess players are indeed irresistible to watch when they play. Their attractive facial features, stunning body, mesmerising eyes and pleasing personality will instantly impress you. So here we have summed up the top ten hot chess players who are immensely famous.

Chess is such a sport that people from all over the world takes part in. Especially in countries like Iran, where women are known for their beauty, long hair and sharp features, Dorsa makes this statement a ‘fact’. Not only is she drop-dead gorgeous, but she also has a pleasing personality. Moreover, she is a fantastic chess player. Her FIDE rating is 2277. In fact, you can also call this diva the sexiest chess player in the world.

Eva Moser is one of those players who gained fame and recognition very early age. In fact, this beauty was awarded several prestigious titles like International Master (IM) in 2004 and Women Grandmaster (WGM) in 2003 by FIDE. At the same time, Moser won both the absolute and women’s Austrian chess championships. Furthermore, she was Austria’s first women grandmaster. So you can well understand the level of her popularity in those days. However, her unexpected death at the age of 36 brought an end to her achievements.

This Ukrainian beauty is also a chess grandmaster. It was from 2004 to 2014 that she played for Slovenia. In fact, she is the fourth woman after Judit Polgar, Humpy Koneru and Hou Yifan to cross the 2600 rating. Needless to say, Anna is damn good looking. Especially her curly hair makes her look even more charismatic. If you have watched her playing, you will know that she plays pretty well under time pressure. So indeed, another beauty with brains!

This blue-eyed Russian beauty is also known for her attractive features and intelligent moves on the chessboard. In fact, FIDE also awarded the title of Grandmaster to her in 2007.  At the same time, Tatiana is also a two-time European woman champion and a three-time Russian woman champion.

Needless to say, this blonde beauty is pretty well-known in the chess world. Her deep blue eyes will keep you mesmerised while she puts forward her exchanges. She is indeed a player of high calibre.

Elisabeth Paehtz is a German chess player who holds multiple prestigious titles like International Master, Woman Grandmaster and others. In fact, this beauty has also won the 1999 German Women’s chess championship.

Needless to say, she is one of the hottest chess players in the world presently. If you have watched her games, you will know that she can create magic on board and is a tactical player. Her FIDE rating is 2479 as per the sources.

Bulgaria is another country where women are often praised for their attractive looks. Stefanova is one of those beautiful ladies who has won our hearts with her intelligent moves and good looks. She is, in fact, a Bulgarian chess grandmaster and Women’s World Champion from 2004 to 2006. At the same time, she has represented her country in the Chess Olympiad in 2000 and the Women’s Chess Olympiad since 1992. As per the sources, her FIDE rating is 2491.

When we talk about the seventh position among the top ten hottest chess players in the world, another Ukrainian beauty’s name comes up. She is a true Goddess. Her bright blonde hair and sheer presence in front of the chessboard is enough to make her opponent nervous. At the same time, her appealing eyes are very engaging and have a winsome effect on her opponents. Needless to say, her killer looks and sharp moves are enough to impress anyone.

She is also a Ukrainian chess grandmaster. At the same time, she was the Women’s World Chess Champion from November 2012 to September 2013. Her FIDE rating is 2431.

There are very few people who are not aware of Anna Rudolf. This Hungarian beauty holds several titles to her name already. She was both the International Master and Woman Grandmaster. This popular chess personality has also worked as a commentator and analyst at many major events. This also included the 2016 World Chess Championship and 2018 World Chess Championship.

Anna is a multitalented personality. She is a chess broadcaster, TV reporter, and freelance writer. In fact, people consider Anna Rudolf to chess just like Ronaldo is to football. Needless to say, this Hungarian hottie is stunning.

This Canadian beauty also happens to be one of the hottest female chess players. Alexandra Botez is an American-Canadian chess player who holds the prestigious title of the Woman FIDE Master. At the same time, she is also a popular chess streamer on Twitch. Tv and has a YouTube chess channel.

As per the sources, this hottie has completed her education at Stanford University. She is also recently been voted as the Sexiest Woman Chess Player of all time by the internet community.

We conclude the list of the top ten hottest chess players in the world with another Ukrainian beauty. She holds the titles of International Master and Woman Grandmaster. At the same time, she is also a chess professional who coaches players and competes in tournaments worldwide.

Anna is also the current and four-time US Women’s Champion. She was also on the 2008 US Olympiad team that won the Bronze.

So as we conclude, we can say that chess is no longer dominated by men but also by some of the hottest ladies. Therefore, you can look at the list and get a complete idea about some of the pretty chess players.