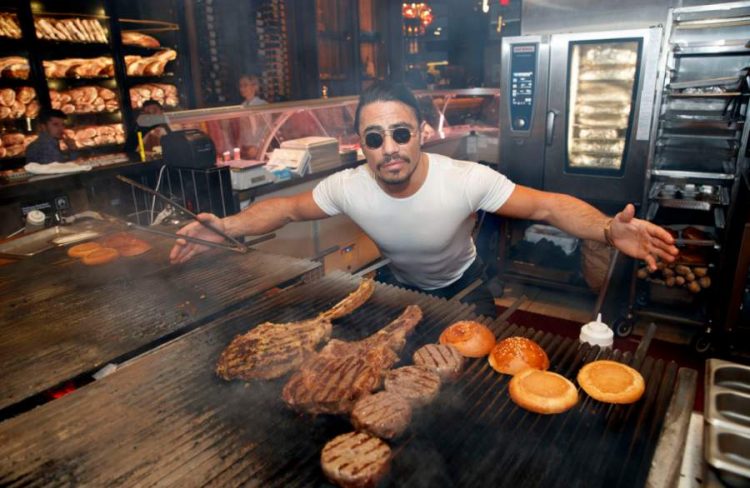 Nusret Gökçe well known as Sal Bae is a popular chef and restaurateur. He is the owner of Nusr-Et which are famous for the steakhouses. His technique of seasoning, cutting and preparing the meat has become popular on the internet. Many users have also created memes that became liked and shared many times. Salt Bae is a stylish man and he handles the meat effortlessly. That comes with years of practice and experience. He is very good at his job in the Salt Bae steakhouse. Salt Bae age is thirty-seven years.

Know all the details of Salt Bae biography here.

Gökçe birth date is 9 August 1983 and his birthplace is Erzurum, Turkey. He comes from the Kurdish family. His father worked as a mineworker. His family was in financial straits so he left his house after sixth grade. He was studying at Faik Sahenk Primary school. Then he worked as an apprentice of a butcher in Erzurum, Turkey located in Istanbul.

Salt Bae became a popular face on the internet because of social media memes and viral videos. This happened on January 2017 when a video of him perfectly cutting the meat became famous. He also sprinkled the salt on the meat with effortless ease. The name of the viral video is Ottoman Steak which he posted in his Twitter account. Then it came to have a hundred million views on Instagram and many people came to call him Salt Bae.

He also has a different way of sprinkling the salt. Because of his popularity, his career flourished and he was able to serve many celebrities and personalities around the world. Moreover, he also started to own a chain of Salt Bae restaurant.

Also read: 5 Best Restaurants in Hanoi That Will Promisingly Give You Unforgettable Dining Experiences

Salt Bae went to many countries such as Argentina and the United States between the years 2007 and 2010. He worked in local restaurants in the places to get experience as a cook. Then he returned to Turkey and opened his first restaurant in 2010 and then he opened one in Dubai.

Now he has restaurants in Abu Dhabi, Jeddah in Saudi Arabia, New York, Boston and Miami in the US, Mykonos in Greece and more.

Salt Bae has kept his family life private. There is a photo of him with several children but it is still unclear whether they are his children or just a random photo with kids. He is well known for his philanthropic deeds. Furthermore, he has donated his money to build a school in his native.

The net worth of Salt Bae

Salt Bae is the owner of many restaurants. He is also a popular butcher and chef. As of this year, he owns 12 restaurants and the food served here are well known to be expensive. That is why Sal Bae net worth is whopping $60 Million. The chef also had the chance to serve some of the famous personalities like Lionel Messi and Paul Pogba.

Salt Bae is a famous man because of his talents. He has used his skills to become rich and popular. Still, now people see his videos.