Mitchelle Blair: A Mother Who Killed her Children and Hide Their Bodies in The Freezer 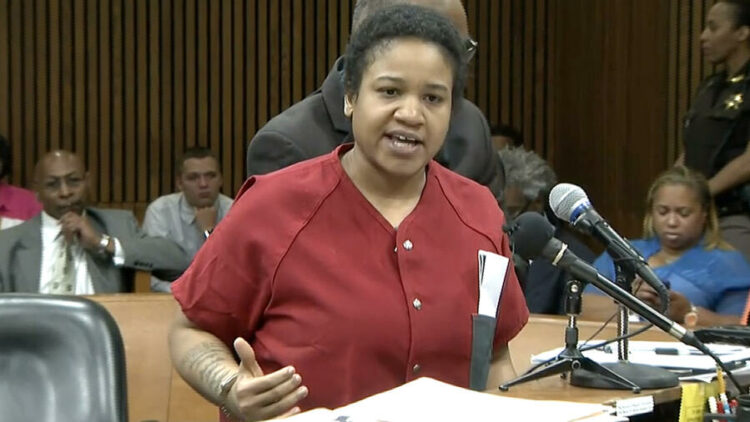 Mitchelle Blair is an American woman convicted of murder, tortured, killed, and stored the dead of two of her children, Stoni Ann Blair and Stephen Gage Berry, in a small deep freezer before abandoning them for almost three years until she was caught. Where is she now? To learn more, continue reading.

In 2015, while authorities were taking Mitchelle Blair’s possessions from her apartment, what was intended to be a simple eviction sent shockwaves across Detroit.

Mitchelle Blair, was about to be removed from her apartment while she and her four children were residing on the east side of Detroit. She constantly begged her family for money after being displaced and could not maintain consistent employment. Family members claimed that the calls stopped when they refused to support her and suggested that she acquire a job and return to school.

What Happened to Mitchelle Blair?

Mitchelle Blair disregarded the family members’ advice after receiving it since, on March 24, 2015, she received a notice to vacate the premises. Nevertheless, she wasn’t there when it happened. At that point, a 36th District Court staff arrived and started taking out furniture from home. The eviction team discovered a deep freezer, and when they opened it, they saw a horrifying scene that shocked the neighborhood and the entire nation.

The crew was shocked to find the frozen body of a teenage girl packed in a large plastic bag inside the deep white freezer in the living room of the house. The eviction team contacted the police right away about the incident. A kid’s body was found directly beneath her when the cops came, which was yet another discovery.

A neighbor promptly revealed Mitchelle Blair’s location. Her other children, Stephen Gage Berry, age nine, and Stoni Ann Blair, age thirteen, were still missing when police found her at the home of another neighbor with her two children, ages eight and seventeen. Blair was detained for murder after being questioned for a short time by the crime scene police officers. She reportedly murmured, “I’m sorry,” after being taken away by the police.

The bodies were taken to a mortuary for three days so that they might thaw and be autopsied. Stephen Berry and Stoni Blair, Blair’s children, were identified. The medical examiner found that their deaths were homicides and that they had been in the freezer for at least a few years—three years.

Why did Mitchelle Blair Kill her Children?

The fact that her two children were assaulting their younger siblings and each other sexually was the key reason behind her horrifying murder of them.

The Murders of Stoni Ann Blair and Stephen Gage Berry

Blair admitted to the judge presiding over the case that she had no regrets about her deeds. I would murder them again, she said to the judge. At the Wayne County Circuit Court, Mitchelle Blair admitted to the killings. She claimed before Judge Dana Hathaway that she murdered her “demons” when she learned they were raping her youngest son, although this claim has never been proven.

It seemed as though Mitchelle was a devoted mother who would do everything for her kids. She mistreated every one of her kids, both verbally and physically.

Alexander Dorsey was the father of Blair’s two girls, Gabrielle and Stoni, and her two boys, Stephen and Matthew. The whole family continued to live in Detroit, Michigan.

Torture by Blair on her Kids

Blair claims that in August 2012, she came home one day to find her son playing with dolls to simulate sex. He was then questioned by Blair, “Why are you doing that?” Has someone ever victimized you in this way?

After hearing that his brother Stephen had done it, she went upstairs to confront him. Blair claimed that after he confessed, she punched and kicked him before covering his head with a garbage bag until he lost consciousness. Mitchelle Blair beat her son Stephen badly throughout the following week, choked him, and splashed hot water at him as he lay naked in the bathtub. According to Blair, Stephen’s skin began to peel off as she repeatedly poured boiling hot water over his genitals.

Later, she forced Stephen to take Windex before putting a belt around his neck, lifting him, and asking, “Do you enjoy how this feels, choked with a belt?” The poor boy, Stephen, eventually passed away on August 30, 2012, and Blair hid his remains in the freezer.

The Brutal Murder of her Second Child, Stoni Ann Blair

Mitchelle asserted that nine months after killing Stephen, she learned that Stoni Ann Blair, her daughter, was also raping her younger son. Stoni was malnourished, beaten, and subjected to boiling water being thrown at her bare body for days until she was finally strangled and killed in May 2013 by Blair.

She had intended to report herself to the police but changed her mind after hearing from her youngest son that he didn’t want her to. Then she asked Gabrielle, her oldest daughter, to freeze Stoni’s body.

No one looked for Mitchelle Blair’s children, Stephen Gage Berry and Stoni Ann Blair, who had been in the deep freezer for almost three years. Blair had previously taken kids out of school. She informed the administration of her intention to tutor the students at home. She always had an explanation ready for questions from neighbors about where the kids were.

No proof of rape was found, according to prosecutor Carin Goldfarb. Judge Edward Joseph of the Wayne County Circuit Court revoked Mitchelle Blair’s parental rights over the children who are still alive. Child Protective Services adopted the kids out of their care.

At the Huron Valley Correctional Facility in Ypsilanti, Michigan, She is currently serving a life sentence without parole after entering a guilty plea to two counts of first-degree premeditated murder in June 2015.

At last, this incident had a great shock among the kids. And they are still not able to get over this trauma!

Everything You Need To Know About The Mothman Of West Virginia

Chadwick Boseman Death: The Black Panther Actor Died At The Age Of 43