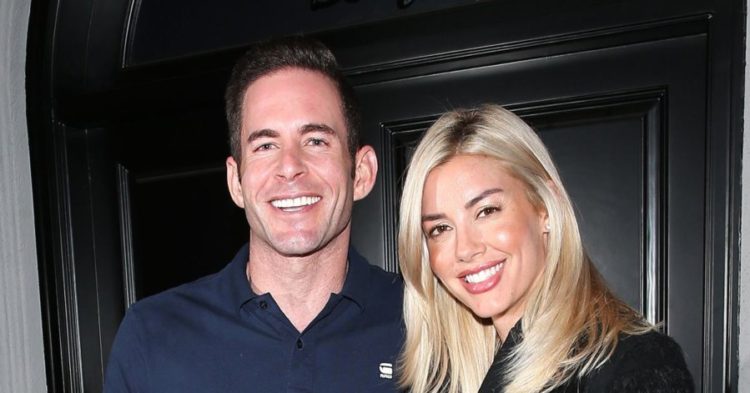 Celebrity romances and relationships are interesting. An HGTV personality has discovered the love of his life after many obstacles. After divorcing Christina Anstead and also fighting two cancers, Tarek El Moussa has finally found happiness in his life. Now he is a better man as he has fallen in love with Selling Sunset’s Heather Rae Young. The couple are in a relationship for more than one year. Now they are engaged and have bought a house. If you want to know about their love story then you are in the right place. Have a look at the details of their romantic love affair.

How did Tarek el Moussa and Heather Young meet?

The first meeting of Tarek El Moussa and Heather Rae young happened on July 4, 2019. El Moussa had a yacht named Bad Decisions docked in Woody’s Wharf. From his yacht, he spotted Young on a boat nearby. So he went to her and introduced himself.

At first, Young did not accept his invitation to visit his yacht. But she promised that she will come to have a few drinks with him later that month. Then they met again as planned and chatted for six hours. Also, they continued to talk through FaceTime. From that time onwards they are inseparable. They began a relationship on July 22, 2019, and revealed it officially in their Instagram account.

How did they announce their relationship to the public?

The couple began their relationship in July. But they made it public in August. El Moussa posted a picture with Young on Instagram and captioned “After more than 3 years on my own I’m so PROUD to say that this beautiful, sweet and talented young lady is my girlfriend. This made many people happy.

Then he also introduced Young to his two children. Then he shared this news with his ex-wife Christina Anstead.

Although the relationship of El Moussa and Young is new they are behaving like a married couple. El Moussa bought a Ferrari for Heather Rae Young on her birthday.

On her thirty-second birthday, he gifted her white Ferrari which is her dream car. Young shared the picture of the car on her Instagram post and captioned “I waited 32 years to meet this special man. I’m a hopeless romantic to my core and always believed in true love. My advice is to wait and don’t settle for anything less.”

For their first vacation together the couple went on a European Tour. They spent their time in places like Amsterdam and Paris. This was their romantic thanksgiving vacation. They posted many pictures on Instagram about their vacation.

El Moussa showed to the world that Young is his family member through the family photo he shared on Instagram. She was in the holiday photo with his kids. Young has become the favorite of El Moussa’s ten-year-old daughter Taylor. Further Young has shared how much she adores the kids. The new family was even wearing matching jammies.

Young joined the El Moussa family on their vacation to Northern California.  They enjoyed an action-packed adventure on the slopes. The new family had a great time.

The moving in and engagement

After dating for nine months, Young and El Moussa discovered a rental home in Newport Beach. Then they moved in together in their new temporary home. They planned to be in this house for a year till they find a perfect permanent home.

Then in July 2020, Tarek El Moussa proposed to Heather Rae Young. He proposed to her while they were on a romantic date on Catalina Island for their first anniversary. They announced the engagement on July 26, 2020, on their Instagram. Young flaunted the expensive ring on her finger and her caption read “The Future Mrs. Tarek El Moussa!!!!”.

The ring which El Moussa gave to Young was an Emerald cut rock of eight carats. El Moussa bought the ring because it was perfect like his girlfriend Young. Their engagement was filmed and aired on the Flipping 101 series. He made Young think that they were just filming special scenes for the show. He was careful not to ruin the surprise.

In September the couple bought a house in Newport Beach, California. It was not the plan of the couple to buy that house. El Moussa simply bought the house but then it became the couple’s first home. They started the renovations in full swing and will settle in it soon.

Rumors of a Vegas wedding

The couple spent a week in Las Vegas, Nevada. During that gateway, they teased the followers of their marriage. El Moussa asked if anybody knew of a chapel in Vegas. Then Young asked her followers whether they wanted her to get married in Vegas or not.

But the couple did not marry in Vegas. They are dating now and are happy in their relationship. Also, they got a cute tattoo together. Their fans are expecting to hear wedding announcements from them soon.

Tarek El Moussa and Heather Rae Young are now an engaged couple. They are happy that they found each other. Their cute pictures and comments on social media are making everyone happy.

You may also read: Who is Hunter Biden’s wife Melissa Cohen?