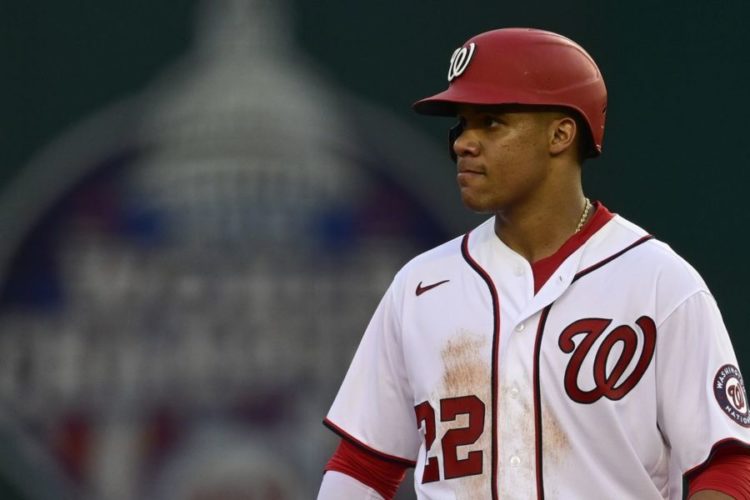 Recently rumors about the trade of Juan Soto gained ground. The Washington Nationals at present sit at the bottom of the NL East Division. Naturally, when a team fails to perform well in a season, various rumors start gaining ground. Most of these rumors are either about the team’s coach or about the team’s star players. One such rumor has surfaced regarding Cristiano Ronaldo’s future at Manchester United. This season United was unable to live up to its potential. That is why it is rumored that Ronaldo will leave the team at the end of the season.

However, the player didn’t hint at any such thing. Similarly, the Washington Nationals have underperformed this season. Thus, rumors have started to gain ground regarding Juan Soto’s possible trade at this season’s deadline.

During the last season, the Nationals sold the likes of  Max Scherzer, Trea Turner, and Kyle Schwarber at the deadline. Thus, the rumors about their star outfielder seemed somewhat convincing, given the team’s reputation for trading their assets at deadlines.

The Juan Soto Trade is Unlikely to Happen

In the latest episode of “The Baseball Insider”, Robert Murray expressed his view on the Soto trade. He admitted that things might change with Juan Soto nearing free agency. But, according to him, the Nationals would not trade him this season. Instead of Soto, the FanSided MLB insider suggested that Nelson Cruz might be a trade option for the Nationals. Nelson was signed by the team on a one-year contract, with a club option for 2023 this offseason.

Juan Soto helped the Nationals to a World Series win back in 2019. But since then, things have started declining for the Nationals. In 2020 their win percentage dwindled to .433. The 2021 season saw a decline to .401. In 2022 it is as low as .333. During the last season, the general manager of the Nationals, Mike Rizzo, talked about a “reboot”. But now it seems that the team needs a rebuild.

Juan Soto meanwhile said in February that he declined a 13-year $350 million extension offer made by the Nationals. However, there is nothing wrong with his rejection of the offer. Soto has been an absolute superstar for the Nationals. The 23-year old has an on-base percentage of .429, with 106 home runs through 503 games. This season, Soto has a record of .250/.393/.471, with eight home runs, 11 RBI, 26 runs, and 35 hits through 39 games. Thus he has been a stand-out performer for the Nationals. This in turn seems to fuel the trade rumors.

Till now, Juan Soto and the Nationals have not reached an agreement. But the clock is ticking away slowly. The star outfielder will be a free agent by 2024. Enrique Rojas of ESPN stated that Soto turned down the extension offer worth $350 million, which would have kept him at Washington for 13 years. Given Soto’s young age and his marvelous skills, he would go on to earn a lot more than what the Nationals had offered him.

According to Spotrac, Soto’s market value could make him earn $503.7 million for a 15-year contract. Thus, the rumors about the possibility of the Soto trade gained ground prominently this season. Since the Nationals have failed to strike out a deal with their star outfielder, it was rumored that they would choose to trade him before he becomes a free agent.

Moreover, with successive unsuccessful seasons, the Nationals would also consider a rebuild. But the comment by Robert Murray seems to put out all rumors, as he predicts that the Soto trade is unlikely to take place this season.