The Papin Sisters: The horrible crime of Christine and Lea Papin who had shared Psychosis condition 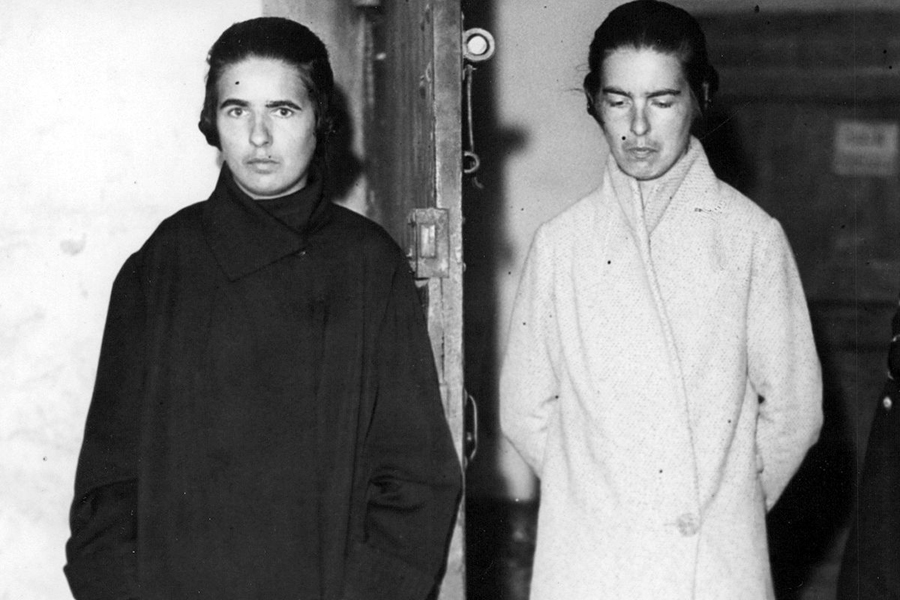 The Papin Sisters are workers in a French elite family in the 1930s who later turned into murderers. What they did to their master is disturbing. For some, the motive for the Papin sisters to kill their masters is strange. Others tag their murder as an outburst of class struggle at that time. Many are aware that class distinction was a major issue in those days.

However, the Papin story shows that no cause can justify murder. Lancelin’s were elites who did not speak with their inferiors. However, they did provide good food and shelter for the workers. Then let us find out what led the Papin Sisters to brutally murder their master.

Papin sisters and their descent job at the Lancelin mansion

Christine and Lea Papin are sisters who worked for an elite French family. In 1933 they commit a horrific crime by murdering Leonie and Genevieve. Lancelin a retired lawyer had many workers at his mansion. Papin sisters are servants of the house who worked many years for them. It was a beautiful house with plenty of luxuries.

As per reports, many say that Lancelin did take good care of their workers. All the servants had rooms, heater and good food was also available. At that time many wanted to work in an elite household as the treatment of servants was better. There is no doubt that the Papin’s did enjoy the perks of the elite house.

However, Mrs Lancelin was not friendly with the servants. She gave more work but did not try to appreciate them even once. At times Leonie Lancelin did White glove tests to check if the servants did the job well or not. As an elite woman she did not want to keep in touch with the servants so she wrote them letters about work than communicate with them in person.

One fine evening turned into a murder scene at Lancelin Mansion

One day there was heavy rain in 1933. Genevieve and Leonie went out shopping and also thought to visit a relative. As servants, Papin’s had to stay at the mansion and do their job. Also, they did not expect anyone to come home until late at night. Like any other normal day, the Papin’s run errands on a gloomy evening. The same evening one of them had to pick up the iron box from the repair shop. When bringing back the iron box, Papin plugged them on to check if it is working or not.

However, the iron box created a short circuit due to which the house had no electricity. The Papin thought to call an electrician in the morning as they did not expect the homeowners to return that night. To their surprise, the Lancelin’s did return home that day. After learning that Papin is responsible for the fuse Leonie started shouting at them. Let us how these turn of events result in murder.

When Leonie displayed her rage, Christine suddenly hit her with a pewter jug. To defend her mother Genevieve immediately comes to help her mother. After seeing this Christine shouted that I am going to slaughter them. There is no clarity on what infuriated the Papin to murder the mother and daughter. A simple rage did not trigger them.

However, there was more to this story. Still, Papin’s did not stop with that but much worse things. When Leonie ran Lea gets her into the attic to harm her. At the same time, Christine shouts to Lea to grab Genevieve and take her eyes out. Lea heard her sister and did the same. There was no one to help the mother and daughter as the Papin’s did serious damage.

They took out the eyes of both of them leaving them in a lot of pain. When Genevieve and Leonie were almost dead the Papin cut their private parts of them. It is one of the grisly crimes in history. Why and what made the Papin’s completely insane to brutally murder their master is a question many have. However, let us see how the crime is revealed.

Evidence of the crime and the lengthy court trial with confusion

Rene Lancelin came to his home to check on his wife and daughter. The scene he at his home was horrifying. He saw the mutilated corpses of Leonie and Genevieve. Also, the room was filled with blood. Lancelin immediately contacts the police. When the cops came to the house they saw every door of the house closed.

They checked everywhere and finally found the culprits. The Papin sisters took off the dress they were wearing at the murder scene and wrapped themselves under sheets. When cops asked why they did this they simply answered that it is self-defence.

The lawyers defend the sisters saying that they were insane at the time of the murder. They point out how mental problems were hereditary in their family. Their brother, grandfather and family members had psychosis. The aftermath of the trial reveals that the sisters had shared psychosis. People having this condition often imagine conditions.

Also, they did brutal things to defend themselves. The court finally shares that the Papin sisters are insane and also guilty of first-degree murder. Also, the court orders Christine’s execution by guillotine. Lea Papin served a prison time of 10 years.

However, while waiting for execution in a cell Christine tried to poke her own eyes. She passed away in the cell before the execution. As for Lea Papin, she was released in 1941 and lived a quiet life after that. The story of Papin sisters is a real horror in real life which shows that mental illness can take a person to any extent.