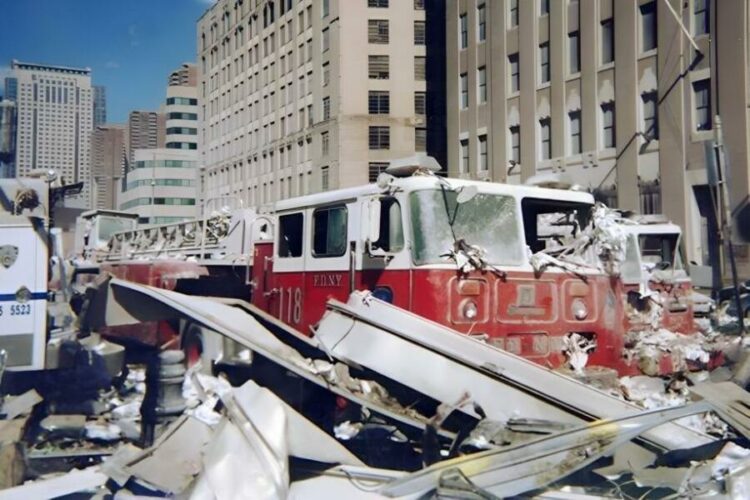 On September 11, 2001, terrorists attacked the World Trade Center, and Aaron McLamb was only 20 years old. He was fortunate enough to have his camera with him when the attacks occurred.

Because of this, he captured the image of ladder 118 during the September 11 attacks, immortalizing the courage of six valiant New York firemen. One of the fire trucks that arrived at the scene of the accident after the horrific attack was Ladder 118.

As the truck’s crew hurried to complete their final job, Aaron was able to take a picture of the vehicle. Aaron captured this image of ladder 118 during the September 11th attacks.

Aaron arrived at his workplace as the first plane impacted the North Tower. After 18 minutes, he witnessed the second plane’s horrific collision with the South Tower, which occurred between the 77th and 85th floors, in terror.

Aaron had the opportunity to observe the events from a safe distance because he worked on the tenth story of a building close to the Brooklyn Bridge. His ability to capture the image of ladder 118 during the September 11 attacks was also made possible by his vantage point.

The firetruck on the bridge is shown heading towards the attack site in the famous image of Ladder 118 from September 11, 2001. The Twin Towers at the time were erupting in ominous, dark clouds of smoke.

From the Middagh St. firehouse, the Ladder 118 truck had arrived. As soon as the second jet hit the World Trade Center, it was asked to assist with the disaster.

Six firefighters— Vernon Cherry, Pete Vega, Leon Smith, Joey Agnello, Robert Regan, and Scott Davidson—quickly climbed into the fire truck and sped off in the direction of the Twin Towers.

When Aaron snapped the picture of ladder 118 during the September 11 attacks, these heroic guys met their untimely demise as they made their way toward the World Trade Center. Aaron worked at a Jehovah’s Witness factory where he printed Bibles, but he stopped what he was doing to watch what was happening.

Aaron recognized the Middagh St. station and liked its trucks as a small boy and had always wanted to be a firefighter. He anxiously anticipated seeing the truck cross the bridge when he snapped the picture of ladder 118 during the September 11 attack.

“Here comes the 118,” he even said to a coworker. As a result, he was pleased to take a photo of the rig even though he was unaware that the crew members would not survive the crisis they were rushing to help address.

Aaron quickly developed the picture of ladder 118 from the September 11th attacks and brought it to the fire station, where the guys identified Ladder 118 immediately.

They examined it under a microscope to make sure the truck on the Brooklyn Bridge was really Ladder 118. The orange Stokes basket that was upside down and the saw box that protruded did not take them long to determine that it was. Each one of these belonged to Ladder 118.

The event was terrifying, according to one of the firefighters. The New York Daily News placed the picture on their main page when Aaron gave it to them.

Consequently, the image of ladder 118 taken during the September 11th attack is today seen as a proud representation of patriotism during the dreadful disaster.

What Happened to Ladder 118?

When Aaron took a picture of ladder 118 on September 11, 2001, none of the six firefighters inside the truck survived the perilous operation. Nevertheless, they had assisted other people in finding safety by the time they met their end.

They hurried up the steps to aid people fleeing the catastrophe area when the truck arrived at the Marriott World Trade Center hotel.

According to a mechanic there, the men had no plans to leave the hotel until they had assisted everyone in escaping the burning structure. They reportedly prevented the deaths of many hundred individuals, including the mechanic, on that particular day.

In the end, over 900 hotel visitors were saved. Six firefighters on Ladder 118 perished when the Twin Towers eventually collapsed, killing hundreds of firefighters.

The South Tower of the World Trade Center collapsed on the hotel, killing many more as well as the firefighters who were evacuating guests. That’s why the image of ladder 118 taken during the September 11th attack has so significant because it captured their last seconds of life.

The fires caused the floors to sag, which in turn pulled on the perimeter columns and caused them to bow and buckle. The towers ultimately collapsed as a result of this chain reaction.

Many Firefighters Lost Their Lives Due To 9/11

Even though the six firemen are well-known for their bravery because the photo of ladder 118 taken following the September 11 attacks exists, many other firefighters also perished in the incident.

In reality, two additional firefighters from the same firehouse, Martin Egan and Robert Wallace, also passed away on that day in addition to the six other men. They are still cherished at the fire station today.

Engine 54 was the firehouse that lost the most personnel during the terrorist attack on 9/11, despite Ladder 118 losing six men.

75 firehouses in the city and more than 200 fire units responded to the emergency. By the time the crisis was over, 345 firefighters had perished.

Over 6,000 people were injured due to the 9/11 disaster, which claimed 2,977 lives. The 19 hijackers who carried out the attack also perished in the murder-suicide. Brian Sweeney wrote a heartbreaking note to his wife among them.

200 firefighters perished from ailments they contracted as a result of the World Trade Center attacks, according to a 2019 research. 1,8 million tonnes of debris had to be cleared up during the nine-month-long clean-up procedure.

The Photo of Ladder, 118 During The September 11 Attack, Still Means A Lot to This Day

Oddly, 118 were found even though none of the crew members were alive. Before being put back in use, it was cleaned up and given new windows. But in 2002, a new fire engine took its place after only being on duty for a few short months.

When it was replaced, the dents caused by debris falling on it were still present. Additionally, the tiller box was destroyed, and the cab’s fender sustained long-term damage.

Aaron suffered from survivor’s guilt and shied away from discussions about the September 11 incident ten years after he captured the scene on camera while on ladder 118. Later, he understood that there wasn’t much he could have done to prevent what happened to the brave firefighters.

After accepting what happened to him, he is still enthusiastic about being a firefighter.

Aaron adores that the image of ladder 118 taken on September 11, 2001, will forever serve as a memorial to the courageous firemen who gave their lives that day to save countless others.

Aaron is proud that the firefighters persisted in their efforts despite being aware of the risks they would be facing. In the end, the calamity was averted for 900 hotel guests. Several would have died if they had been inside the hotel when the tower fell.

The destroyed Twin Towers have been replaced by four towers so far. At least another two are anticipated in the future, along with a museum and memorial to honor those who perished in the attacks.

Aside from that, the image of ladder 118 taken during the attacks is still regarded as one of the most moving memorials for rescuers who lost their lives while attempting to save everyone from the 9/11 tragedy.

Also read: Why is Russia Attacking Ukraine? Reason and Effect of This War?