The Truth about Google Results for “White American Doctor” 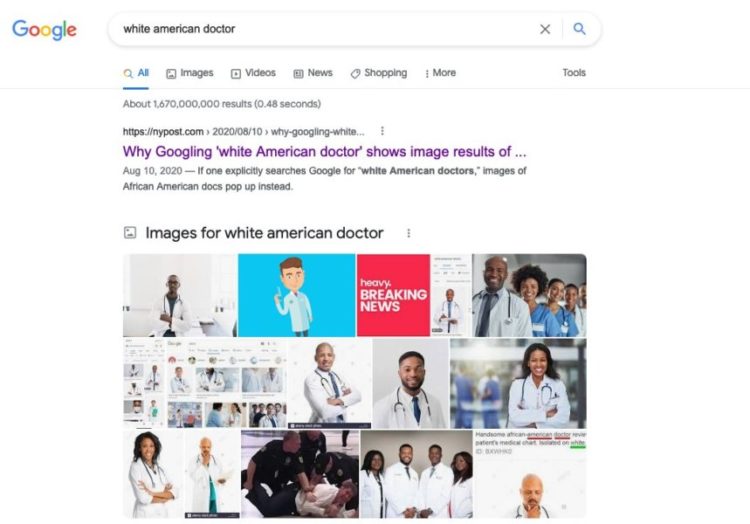 The White American doctor Google search has become viral this week. Many people are still searching as they want to know the reason behind the Google search results. Do you know what the results are? Many images of Black Doctors will be on the screen if you search for White American doctor. Many are wondering why the search results are inaccurate in Google which is known for its accuracy.

Some think that the activists have hacked Google so that is the reason why different search results are showing. While others say that this is some sort of a conspiracy. Here find out the details of the reason behind these Google search results. You do not need to be an SEO expert to understand this viral issue about the Google search.

One Twitter user shared about the different search results he got in Google when he typed White American Doctor. He said that someone has hacked into the Google algorithm. Then after seeing the tweet of the user many tried it in their own Google search engines. The same thing happened for them too.

Somebody hacked googles algorithm?! 😂😂😂😂 look what shoes up when you google white American doctor 😂😂 pic.twitter.com/VdgKgJPbfy

Some found out that whatever profession they searched for with the words white American, only images of European people were in the search results.

So this has confused a lot of people. They think that there is a fault in Google’s algorithm. That is the reason why for the keyword White American Doctor different search results are showing.

But we have to understand that the results are the reflection of what the Google users input in it. For instance, the same thing happened some years before to a Twitter user. When she searched for ‘Boston’s black neighborhoods’ the first results she got were Boston’s ‘worst’ neighborhoods. So why are these mistakes in Google search results happening?

You may also read: 5 Ways to Rank Videos on Google and YouTube for Video Marketing

The Google Public Liaison Danny Sullivan revealed that the results pages were strong on the keywords ‘Boston neighborhoods’ generally. It will scan all the information in its engine and will pick one as the featured snippet and show it as the first result. Further, he also stated that the featured snippet system in the Google search engine is not perfect. Therefore only with the feedback of the users can the mistakes be rectified.

Sullivan also shared an example. He said that when people post images of white couples they only say couples and they did not specify any race. But if there are mixed couples the white gets specified. So the image search only depends on the words. Hence when there is no proper word mentioned with the images, wrong images may be shown as results.

Is Google showing importance to the images of African-Americans?

According to the explanation of the Sullivan, Google only works with the different queries of people and how the content writers respond to it. So it is not the algorithm of Google that is biased. It is not favoring the African-Americans as some people are suspecting. The Google users are the ones who are biassed because they do not use the right words when posting the images.

They do not match the words to the images. Hence it will lead to a lot of confusion. All the alt tags and captions must be proper. Then it will fit the keywords of the users who use it to search in Google.

This was done with an effort to write SEO-friendly content. So this was not a deliberate action. Therefore the next time you are making a webpage, use the correct keywords for the proper image. Otherwise, it will lead to a lot of confusion. If we search for particular results then Google will show a wrong result which it thinks is what you want.

This is the truth about the Google results for White American Doctor. There is no conspiracy in this issue. It is only a simple confusion that will be rectified by Google soon.

You may also like: 10 Best Google Doodle Games To Kill Time