Who is Chase Stokes Dating? 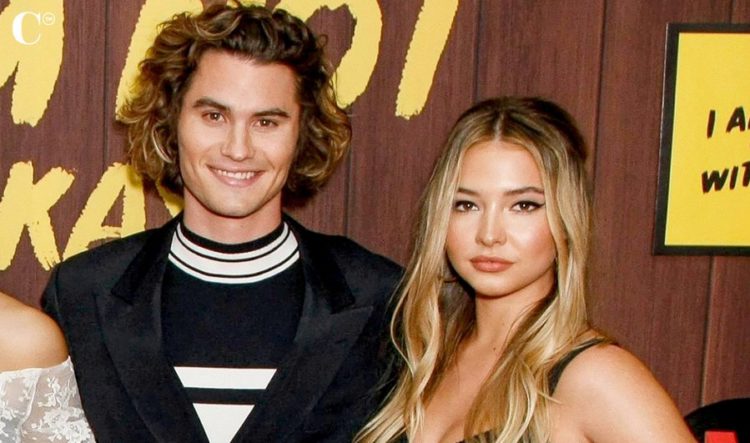 One of the popular drama series on Netflix that stole the hearts of many people is Outer Banks. The couple did the best acting in their respective roles as John B (Chase Stokes0 and Sarah Cameron (Madelyn Cline). The chemistry between the couple is awesome and thus, it has started to work in their real life too. It has been a year since the couple started dating after they met through the Netflix Drama Series, Outer Banks.

In June 2020, the couple announced that they started dating. But they are rumored of dating in April 2020. It was the time that they were quarantined together during the Pandemic. Here let us discuss more the couple and their relationship.

Chase Stokes is an American actor who became popular after appearing in the Netflix drama series, ‘Outer Banks’ as John B. He was born on September 16, 1992, in Maryland, US. His parents are Jeff Stokes and Jennifer Canning. But his parents divorced and his father married another woman, Nicki Osterman Stokes.

The Outer Banks star has siblings named Kaden Stokes and Kendall Nicole Stokes. Both the siblings are his step-siblings. Additionally, he has three more siblings such as Evan Walker, Griffin Walker, and Rylie Walker.

He went to Timber Creek High School and graduated from Valencia College. In 2015, he completed his MBA degree at the University of South Florida. He started his career in a short film, ‘Lost Island’ in 2015. Then he appeared in many movies and got a chance to act in a Netflix drama series finally, where he met Madelyn.

Who is Madelyn Cline?

Madelyn was born on 21st December 1997 in South Carolina. She was born to Mark Cline and Pam Cline. She completed her schooling at the Charleston Day School. Then, she completed her graduation from Coastal Carolina University.

Cline started her career in TV ads where she got a chance to appear in ads for Sunny D and T-Mobile companies. Then, she got a chance to act in movies for supporting roles. She gained huge popularity of acting in the Netflix drama series, ‘Outer Banks’ as ‘Sarah Cameron.’ Her new films are

Her favorite activities are hiking, drawing, photography, wakeboarding, and horse boarding. She is much active on Instagram where she has 9.9 million followers. She shared more than 120 posts on her account so far. In addition to Instagram, she is also active on Facebook and Twitter. Her net worth may range from 1 to 5 million US dollars. This net worth is based on social media sites and blogs.

Chase Stokes is dating his ‘Outer Banks’ co-star, Madelyn Cline. In April 2020, the dating rumors about the couple came out through the media. The couple confirmed that they were quarantined together with other cast members of the Outer Banks. Then, the actor Stokes posted a flirtatious comment on Instagram about the actress, Cline.

Then, in June 2020, the couple confirmed their romantic relationship on social media. They posted photos of them enjoying their beach date with a bottle of wine. Finally, on the birthday of Stokes, which is on 6th September 2020, Cline shared the gallery of their never-before-seen photos of Stokes and her. In November 2020, Cline attended an interview where she talked about her relationship with Stokes. It was the show ‘Entertainment Tonight’ where she shared her quarantine experience too.

Again in December 2020, Stokes gave a surprise to his girlfriend on her birthday. He posted some never-before-seen pictures of Cline. And he wished her with some sweet words about changes in his life after she came as a partner.

Also read: Does Rudy Pankow Have a Girlfriend?

In February 2021, Stokes attended an interview at US Weekly where he shared about his new change-over life after the entry of Cline. He praised her and talked about many lovely things about their relationship. Then, in April 2021, Cline shared a sweet post about the first anniversary of her love life with Stokes. She shared photos of her with Stokes in a beach location. Cline also shared pictures of Stokes’ pet dog.

In May 2021, the couple attended their first function ‘MTV’s Movie & TV Awards.’  While they were talking on the stage, Cline kissed Stokes passionately. After that, the couple shared their moments on the red carpet and they posed with their award for the Netflix series.

Did Chase Stokes and Madelyn Cline Break Up?

This is all about the relationship between Chase Stokes and Madelyn Cline. The couple’s chemistry is too good to watch on TV, but there is no idea whether it will work out well in real life.