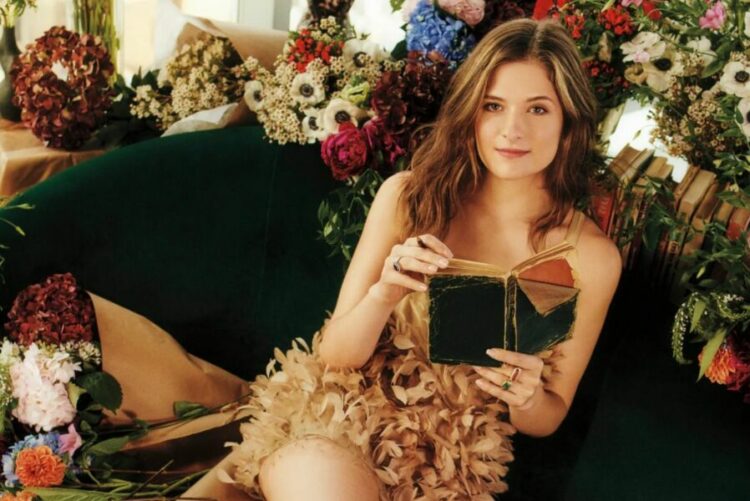 Louisa Jacobson Gummer is the youngest child of actress Meryl Streep and artist Don Gummer. Meryl and Don wed in 1978; they have four kids, all of whom are currently engaged in the arts. The 38-year-old actress Mamie Gummer is most recognized for her work on The Good Wife and The Good Fight. Henry Wolfe, 42, is a musician. Grace Gummer, their third child, is an actress who recently appeared in the dark thriller Mr. Robot starring Christian Slater. Meryl once said in an interview with The Telegraph that her kids have always loved to act. Despite their famous mother, the kids grew up out of the spotlight.

HBO’s lavish drama The Gilded Age is based on the tale of a young woman who moves in with her eccentric, snooty aunts in bustling late 19th-century New York City. After learning that her deceased father spent her wealth. The young woman in this movie is Marian Brook. And Marian Brook is the character performed by Louisa Jacobson, a rising star you might believe you’ve seen before.

You might be wondering why Jacobson seems so familiar if this is her first significant acting role. Let me be the first to pull the wool over your eyes and reveal that Louisa Jacobson is a Gummer. The mysterious third Gummer sister!

Louisa Jacobson Gummer, like the rest of the Gummer-Streep family, has certainly inherited a flair for the arts. Her older sisters, Mamie, and Grace Gummer, are accomplished actors. They, like Jacobson, resemble their legendary actress mother. They have also appeared in movies like Mr. Robot and Ricki and The Flesh. Numerous films, while her brother, Henry Gummer, is a gifted pianist.

Thus, let’s discover more about Louisa Jacobson, her career path, and The Gilded Age below.

About the Role of Louisa Jacobson Played in Romeo & Juliet

Despite the fact that “The Gilded Age” is Louisa Jacobson Gummer’s debut television role, she is not new to professional acting. In 2019, she appeared in a production of “Romeo and Juliet” at San Diego’s Old Globe Theater, her first role since graduating from Yale. “It’s no pressure, you know, portraying these iconic characters,” she said in an interview with NBC San Diego. According to Jacobson, the job was “a dream come true.”

After appearing in “Romeo and Juliet,” Jacobson reportedly felt considerably more at ease on stage than she did on TV. Indeed, when she arrived on the set of “The Gilded Age,” she found herself attempting to perform in front of a live audience and behaving in a more theatrical style, as she told Broadway World.

Louisa Jacobson is the cause of Meryl’s participation in “Mamma Mia!”

Louisa Jacobson Gummer had an influence on her mother’s professional life. According to Meryl Streep, Jacobson was unwittingly responsible for her mother’s role in “Mamma Mia!”. After September 11, Streep apparently took Jacobson and five of her friends to see “Mamma Mia!” on Broadway. In an interview with Good Housekeeping, she said: “I took my 10-year-old daughter Louisa and six of her friends, and we were all up dancing in the aisles,”.

Streep was so enamored with the musical that she even penned a fan letter to the actors. When the film was in the works, the production crew remembered her letter and asked if she’d like to be a part of it. “Are you nuts, I asked. I want to do this. It was finalized, “To the Daily Record, she spoke.

Even though Jacobson adored the musical, she wasn’t thrilled to watch her own mother don the iconic platform boots and spandex to play Donna. In fact, when Streep was filming the final disco scenes, she reportedly thought, “Yes, this is what my girls feared more than anything else!” (per Good Housekeeping).

About Louisa Jacobson Gummer’s career as a model

Louisa Jacobson began her modeling career by appearing in glossy publications and in a Christian Dior campaign. Despite her experience dressing for the character, Louisa found certain of Marian’s period attire challenging.

She uttered: “I wore a corset that was cinching my waist and very tight collars. At first, I didn’t know how to move, but I think that works for Marian’s character. She’s in this new place that’s not familiar, and she’s not comfortable.”

She is a History Geek

“The Gilded Age” is the ideal show for Louisa Jacobson Gummer in many respects. Not only is the role similar to her, but it’s also a historical drama – and luckily for Jacobson, she is a major history geek. “I’m such a history nerd,” she told Vogue. “It’s a beautiful part of being an actor to delve into times you’ve never studied before.”

Jacobson was comfortable with the process of getting ready for her part. As she spent a lot of time immersing herself in the era, reading books, watching movies, and listening to podcasts from or about it.

She told Collider that she prepared for the role by reading books like Edith Wharton’s “House of Mirth” and “Age of Innocence” because “all of them had these heroines who didn’t fit neatly in society.” She even acquired a subscription to the New York Public Library so she could conduct in-depth historical research there.

Look at any image of Louisa Jacobson Gummer, and you’ll notice she has an incredible sense of style. But as Jacobson emphasized in Tod’s advertisement, she never forgoes comfort for style. “Comfort is non-negotiable in my aesthetic, and I would say it’s dynamic (not static) and ageless,” she explains.

Jacobson has sported a variety of “dynamic” and “timeless” clothes over the years. In 2016, she made an impressive red carpet appearance wearing a fitted white blazer, navy leather pants, and platform heels. She donned a sleek khaki strapless floor-length gown with stunning diamond earrings to the 2009 Academy Awards.

Also read: Who is Rupert Friend? Check Out His Net Worth