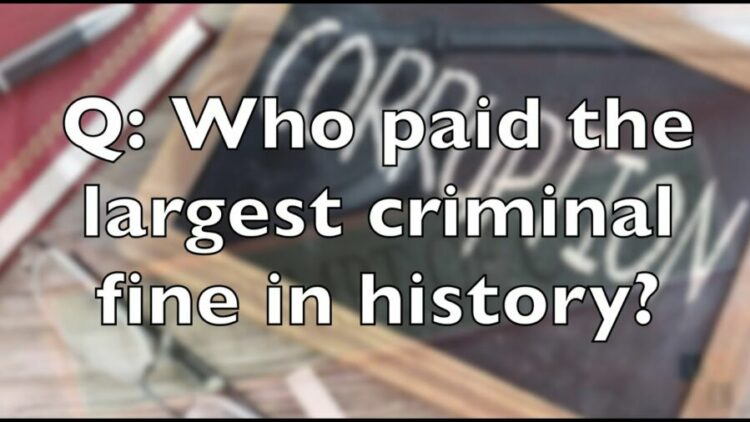 Worldwide, businesses have been forced to pay millions, and sometimes billions as criminal fine in history. People who have been proven responsible for significant misbehaviour, environmental catastrophes, or the loss of life have since been forced to make reparations totalling billions of dollars. Let’s describe a few of the Largest Criminal Fine in History here.

After the Fukushima nuclear disaster in 2011, critics pointed fingers at a lack of preparation for the situation and a confusing government and plant operator response. According to an independent assessment ordered by the Japanese government, Fukushima was “a profoundly man-made tragedy,” and the energy firm was held accountable for failing to follow safety regulations and make emergency plans.

The only criminal case resulting from the tragedy was dismissed in 2019 by a Japanese court, which acquitted three former Tepco officials of carelessness.

However, the tens of thousands of people who had been evicted from their houses due to radiation leaks filed compensation claims with the business totalling 5 trillion yen, or nearly £330 billion.

Fukushima: Was TEPCO at fault?

The Japanese parliament claims that it intentionally caused the Fukushima nuclear tragedy. TEPCO did not follow safety regulations or prepare for a tsunami that is why they paid Largest Criminal Fine in History. As a result, disaster victims had the right to sue the firm in civil court.

You must keep in mind that any crime committed by an employee in the course of his work for the company’s profit is referred to as a corporate crime in corporate law. In TEPCO’s instance, the offence was putting residents’ lives in danger by not preparing enough for calamity. Corporate offences that could incur civil and criminal fines include the following:

Also read: How To Select The Best Criminal Lawyer?

Most costly criminal penalties that businesses have to pay

Following the financial crisis of 2008, new regulatory agencies were established, and banks were subject to more scrutiny for shady business practices. Subprime loans, which banks made to borrowers who were very unlikely to pay them back, played a significant role in the crisis. President Barack Obama claimed at the time that the mortgage finance methods that caused the financial crisis were “immoral, unethical, and dangerous,” but not necessarily criminal, making it challenging to penalise important figures, particularly in the subprime crisis.

If you think back to 2010, the Deepwater Horizon Oil Leak, regarded as the most significant marine oil disaster in history, caused a massive oil spill in the Gulf of Mexico. It is believed to have covered an enormous 60,000 square miles just off the Texas coast and spilled into the sea for four months. Used skimmer ships, floating booms, controlled burns, and 7,000 square miles of oil dispersant were a major response to safeguard beaches, wetlands, and estuaries from the spreading oil.

The fishing and tourism industries suffered tremendous damage, making this the worst industrial environmental disaster in U.S. history, in addition to negative repercussions from the response and cleanup efforts.

The oil corporation B.P. reached a £15 billion settlement with the U.S. Department of Justice in 2016, and it is estimated that the business ultimately paid out more than £47 billion in compensation.

Volkswagen’s emissions scandal, sometimes known as “Dieselgate,” has cost the automaker at least $34.9 billion in criminal and civil fines.

Investigations in 2014 revealed that V.W. deliberately inserted defective hardware and software into their cars. The “defeat devices” could distinguish between when the car was being tested and when a regular user was operating it. The gadgets reduced emissions during testing. V.W. breached the According to the E.P.A., the Clean Air Act. U.S.

The Clean Air Act, or 42 U.S.C. 7402 et seq., is a body of federal legislation that controls factory and automobile air pollutants. The legislation prohibits selling products that don’t adhere to U.S. emission regulations. According to the E.P.A., V.W. sold about 590,000 vehicles with defeat devices installed. Audi, Volkswagen Tuareg, Passat, Golf SportWagen, Jetta SportWagen, and VW Beetle are among the available models.

The summary of V.W who paid The Largest Criminal Fine in History

The Federal Trade Commission has ordered Facebook to pay $5 billion in fines for violating users’ privacy. That is the biggest fine ever levied against a company in the U.S. for violating privacy. Prior to Facebook, who paid the Largest Criminal Fine in History are British Airways may have to pay $230 million, Equifax paid $2785 million, and Uber paid $148 million for privacy violations.

Politico and other outlets claim that Facebook overpaid the fine in order to protect its owner, Mark Zuckerberg, from legal responsibility. According to the F.T.C., Facebook failed to defend users against Cambridge Analytica, a corporation that collects user data. Cambridge Analytica used the collected data to target Donald Trump’s supporters. The F.T.C. said, in essence, that Facebook:

Pfizer, who paid The Largest Criminal Fine in History is $2.3 billion (£1.7 billion) and is one of the largest fraud settlements in U.S. history for making fraudulent promises about the now-withdrawn painkiller Bextra.

The U.S. Department of Justice claims that the company’s sales staff directly marketed Bextra to doctors for unauthorised uses and dosages. At the same time, the marketing team pushed the medicine for acute pain, surgical pain, and other unapproved purposes.