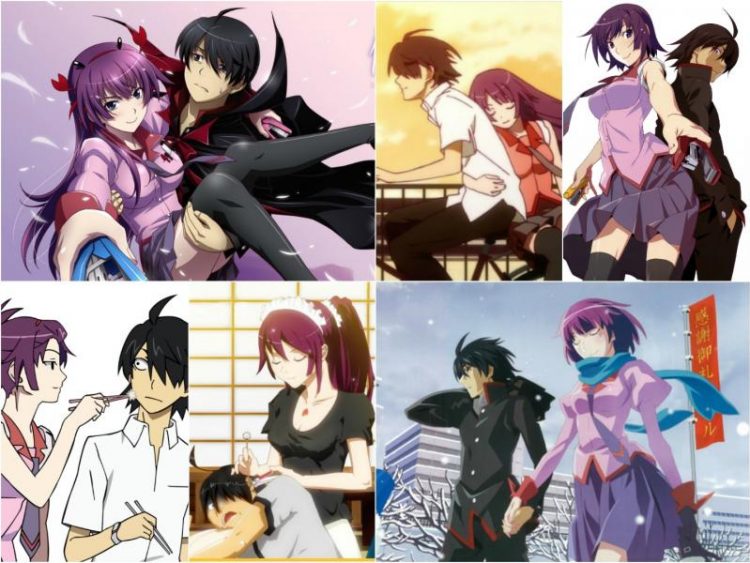 Who doesn’t ship characters while watching their favorite anime, right? Moreover, folks, love is in the air. An anime can’t always be about ecc*hi stuff, adventure, and action. We do need some romance in our life too. However, it’s a complete lie if we say best anime couples exist only in romance genre animes. To make a list of the best anime couples of all time, genre comes last. Moreover, a nice dash of romance makes the action even spicier. Also, as fangirls or fanboys, we love to see our favorite characters unite.

So, to fill our Kokoro with feelings, let’s find out the 15 best anime couples of all time. Let’s start!

Alright, people, hands up if you have shed buckets of tears while watching this one. So what’s so special about them? Well, they have created some intensely emotional moments. Moreover, their relationship is so human, with all their complicated pasts and naive adolescence. It’s a romantic memory scape for the viewers.

And that’s why, perhaps, they are so dear to anime lovers. Just think of finding happiness in another person without whom your whole world feels empty.

Story-wise, Kaichou Wa Maid-Sama offers you many things to look forward to. One of them would be the chemistry between Misaki and Usui. In the anime, Misai doesn’t trust boys and men at all. So, how does this love story begins? Well, it’s Usui who changes Misaki’s outlook. Moreover, Usui understands her troubled life. Despite how much Misaki mistrusts him, he was always there for her.

Therefore, their chemistry is tinged with subtle tension and warm feeling, making it an absolute delight for the viewers.

Since there’s a controversy regarding the ending of Attack On Titan, let’s just say one thing. It was always about Mikasa and Eren. Love was at the core of the whole story.

Moreover, Mikasa’s love for Eren doesn’t only show through the gifted scarf she wears around, but the way she goes about protecting Eren at all costs. In fact, it’s their love that changes the course of the canon story in all sorts of ways. No wonder they are an iconic couple.

Kimi no Todoke offers a very sweet and intriguing relationship between one of the best best anime couples Shouta and Sawako.  Shouta is an outgoing guy whom a lot of girl’s love. However, the moment he sees Sawako, he is attracted to her. Moreover, their relationship helps Sawako get over her insecurity about herself. (as she resembles Sadako from the ‘the ring’ series, according to her friends).

Also, he is very possessive when it comes to Sawako. Though Sawako is unresponsive to Shouta’s feelings at first, gradually, she reciprocates.

It’s not surprising that the Chimera ant arc was the best arc of Hunter x Hunter. More so because of the well-written character of Meruem. And, to be honest, Meruem’s evolution as a character is solely because of Komugi.

Both Komugi and Meruem share a very special bond. It all started with the Gungi game in which Komugi beat Meruem. Thereafter, they both become friends, and finally, during the last hours of his life, Meruem chooses to be with Komugi.

The chemistry between Ban and Elaine is emotionally intriguing. Well, from Ban’s first appearance, you cannot guess that he is so much capable of love. In fact, he can go to any extent to save Elaine, for whom he developed an absolute love.

At first, the relationship may seem awkward, as Ban, a human, falls in love with Elaine, a fairy. Moreover, Ban is ready to pull off an ultimate betrayal to his friends just to save Elaine. Therefore, it was nice to see their ship sailing.

Suppose you asked your crush out, but it leads to a horrible misunderstanding. Crazy, right? Gekkan Shoujo Nozaki-Kun takes this motif to a huge level when the High school girl Chiyo confesses her feelings to Nozaki.

However, Nozaki gives her his autograph (because he is a manga artist). This is how their friendship starts, as Skura becomes his assistant. Though Nozaki is completely oblivious to her feelings, there are hints that their ship might sail. However, there’s no season two for that.

So, the relationship between Ichigo and Rukia isn’t like a ‘normal couple.’ Rather, it surpasses that. Both Ichigo and Rukia were always there together through ups and downs. Their constant bickering, goofiness, and, most importantly, fighting all the odds to protect each other is an example of their immense love.

No matter how much the hardships pull them apart, destiny brings them back together. However, they share a relationship that isn’t ‘romantic’ but more like best friends.

So, there are otakus out there who claim that Clannad is one of the best romance anime of all time. Therefore, it’s only natural we will find one of the best anime couples here. Tomoya is a delinquent with a negative outlook on life. However, throughout the story, he learns to appreciate his friends and family.

Thereafter, when he meets Nagisa, she teaches him about love, despite having a rough past. Nagisa, the mysterious girl, exudes optimism and brings a change in Tomoya’s life.

Iki Hioryi’s life changes when she meets Yato, the God, one day. Mistaking him as a human, she tries to save him from an ongoing car. Remarkably, she survives the accident.

The duo shares great chemistry. Yato, the goofy god, wants to be showered with fortune, while Hiyori is a normal high school student who wants to be normal once again. Gradually, Yato falls for the human girl Hiyori. However, she is completely oblivious to his feelings. They are one of the cutest couples of animeverse.

Also read: 13 Best Yuri Anime Among The Best of All Time

The anime Yuri on Ice has gifted us Viktor and Yuri. It’s not the first time that a sports anime is tinged with yaoi. In Yuri on Ice, the relationship between Yuri and Viktor has implied homosexuality.

It’s not only realistic and humane, but through their interactions, you can feel how much care for each other. Viktor’s exuding confidence in Yuuri makes the latter realize his true potential. Moreover, their healthy mutual relationship makes it so much heart-fluttering series to watch.

Kimi no Na wa or Your Name isn’t an uncommon name in the animeverse. More so, due to one of the best examples of love shown by Mitsuha and Taki. Their love surpasses the normal definition of the same. Tinged with supernaturalism, their love story seems like a surreal experience for the viewers.

Moreover, they are like fated lovers. The red string of fate only connects them and makes their destiny on the same plane, eventually. The characterization and chemistry are also very strong with them.

Through Yuuko and Teiichi’s relationship, love even transcends the concept of life and death. In the anime, a paranormal club investigates a haunted school building. There, Teiichi encounters Yuuko, a ghost. Despite her spirit being tied to the building, she gradually develops feelings for Teiichi.

Yuuko’s past is tinged with darkness. But, that doesn’t stop Teiichi from loving Yuuko. Rather, he helps her to spirit to be free.

Next, we have Takeo and Yamato. Well, Takeo, with his big, muscular body, may scare people off, but inside, he is a gentle soul. He is perhaps the most kind-hearted person in this anime, who puts others first before him.

Through a stroke of luck, he meets Yamato. Takeo rescues her from bad guys on the train. The small, sweet, and gentle girl becomes his crush. Moreover, she also reciprocates his love.

Love can even transcend time and space. Kurisu (aka Kristina) and Okabe are destined lovers. Kurisu is a scientist who visited Japan for a conference. Thereafter he meets Okabe and soon connects with a mutual love for science. Despite their constant bickering, their ship sails.

Okabe even goes through a lot to save his loved ones, and that includes Kurisu as well. He challenges the time itself to prevent everything wrong. And yes, they do kiss and express their mutual love.

In the end, the world of anime offers you so many elements. Therefore, a little bit of romance on top is like a chef’s kiss. So these were some of the best anime couples in the animeverse.