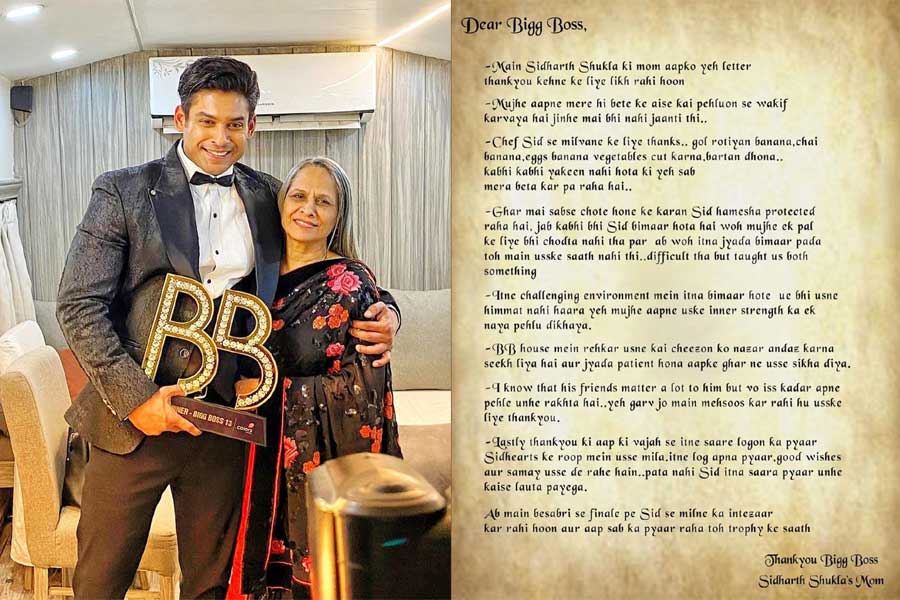 Open letters have become the hottest trend in the entertainment industry and we have seen so many celebrities expressing their views and opinions on different matters with its help. Family and friends of Big Boss contestants have been known to write open letters from the past few seasons and the latest one to join the bandwagon is none other than Siddharth Shukla‘s mother, Rita Shukla who wrote the emotional letter to Big Boss to express her gratitude to him for showing the interesting side of Siddharth. Well, this is for the first time where someone is writing a thank you note to the Big Boss, earlier also people have written the open letter like this but they were written in distress.

As the finale is away from two days, all the contestants are very excited about winning the show and getting that Big Boss trophy. However, only of them will win and the time will tell us.

His performance in Big Boss 13 is phenomenal

We all know Siddharth Shukla well, he worked in so many popular shows like Balika Vadu and if we talk about Bigg Boss Season 13, his performance in the show is extremely phenomenal. We have seen each and every side of him in the game. Be it his furious nature, caring side or an emotional corner, we have seen them all.

Siddharth’s mom has shared the image of her open written letter to Big Boss on his official Instagram account where she has expressed her gratitude toward the house for showing the interesting sides of Siddharth which she had never observed. She also thanked Big Boss for various things which you can check out in this post given below:

In her post, Siddharth’s mom discussed how the Balika Vadhu entertainer has made some amazing progress and has gotten proficient at performing family tasks and that she has likewise figured out how to show control during the procedure. She said Chef Siddharth se milwane k liye thanks, Mujhe uski internal quality dikhane k liye thanks, read a selection from her post.

The most emotional reunion of our favourite mother-son duo after 110 days in the #BB13 house! Full of emotions and pure love. Double tap and let us know if this reunion has made you shed a tear! . . #TeamSidharthShukla #SidharthShukla #RealSid #MomSon #Love #Reunion #MotherAndSon #BB13 #BiggBoss #BiggBoss13 #MomAndSon

A month ago, Siddharth Shukla’s mom visited the Bigg Boss house and she also cheerfully greeted with all the fellow participants. She later conversed with Siddharth secretly and recommended him not to take the pressure.

Well, whatever people say about him, love him or hate him….but one this is that they can’t ignore him. What are your views whether he will win the show or not?