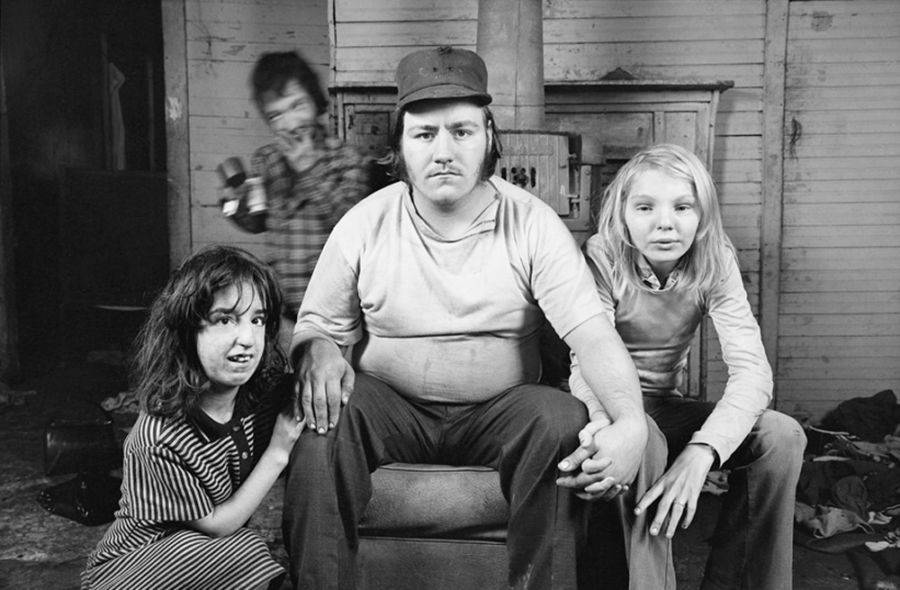 The Whitaker family from Odd, West Virginia is one of the most famous inbred families in the United States. Only little details are available about the family as they are living a secretive life. It seems because of their inbreeding they are suffering from lots of diseases. They are also receiving protection from the local neighbours and local authorities. The family got a lot of recognition after Mark Laita photographed them for his book Created Equal in 2004. He faced lots of threats from his neighbours when he tried to photograph them.

What is Inbreeding & How Whitaker Family affected to this?

Inbreeding means the act of close family members engaging in a s*xual relationship to have children. It goes against the biological aim of mating which is the shuffling of DNA. The human DNA is bundled into twenty-three pairs of chromosomes. In each chromosome, there are hundreds of thousands of genes. Each of the genes has two copies known as alleles. The genes determine the different aspects like hair and eye colour and also the biological factors like the blood type.

They fall into two categories dominant and recessive. If one of the genes is dominant the baby will have the feature of the dominant gene. But for the traits to get from the recessive genes both genes need to be recessive.

Inbreeding stacks the odds of children born with conditions like congenital defects and genetic diseases. If the blood-relating mating partners contain similar DNA, they will carry the recessive genes. It increases the rate of neonatal death.

As inbreeding is considered dangerous for the offspring born because of it, it is still baffling to hear cases of inbreeding. In hereditary systems inbreeding was followed and first cousins married each other because they wanted the family legacy and money to stay in the family. It was mostly followed by royal families because it prevented an outsider to take the throne.

In 2015 a study on Egyptian mummies showed that the male members of the royal family were taller than the general population and female members shorter than average. They did not have any consistent height. This was one of the effects of inbreeding.

One of the best examples of the effects of inbreeding was Charles II. He belonged to the House of Habsburg whose kingdoms included Spain, Austria and Hungary. The family’s line ended with Charles II of Spain born in 1661. It seems his mother was his dad’s niece and his grandmother was also his aunt. Because of the inbreeding, he suffered from many defects in his speech and he also had disabilities. At death, he had no blood and his heart was the size of a peppercorn. Further his intestines were rotten and his head was full of water. So these are the worst effects of inbreeding.

Also read: The Right Approach to Caring for a Person with Dementia at Home

Who is the Whitaker Family?

In 2020 Mark Laita visited the Whitaker family again to know about their condition. He recorded a video that received lots of dislikes than likes. But many people saw it and it became viral as it got more than 25 million views. The documentary he made depicted the horrors of inbreeding. The members of the Whitaker family are Lorraine, Ray and Timmy suffers from some sort of mental defect. They live in very poor conditions and are hardly surviving. Ray does not even talk as he only grunts.

Totally Mark Laita has visited the Whitaker family four times to offer financial gifts, food and clothes. The individuals in the videos are brothers and sisters born out of inbreeding.

Inbreeding led to mental and physical deformities in the family. Timmy alone is a cousin. There is no way to confirm whether the Whitakers are born from parents who were related. But it seems that it is a common occurrence in that part of the country. The Whitakers are the most extreme case which proves why they have mental and physical deformities. Many reports suggest that the inbred siblings have reduced cognitive disabilities, heart diseases, lung function disorders, heart diseases and more. The inbred children are at high risk of getting diseases like these. The genetic disorders are recessive.

Inbreeding is common in West Virginia and the families are protected by their neighbours. Lots of secrets are not allowed to spread out and are kept under wraps.

The Whitaker family is British by descent and they live in very unhygienic conditions. Ray, Lorraine, and Timmy are related and they live together with another one Freddie died of a heart attack a long time ago. Their story is similar to the Colt Clan family incest where the father of the family assaulted his own daughter to have kids. It was 4-generation of incest that was shocking. The sisters of the family shared a bed with their brothers. Their tale was horrible and the same can be said of the Whitaker family.

The Whitaker family members are very secretive about their parentage. No one knows how they are living now. But one thing is very much clear, they are inbred.

The reputation of West Virginia for inbreeding

There are lots of stereotypes about West Virginia residents because many reports say that inbreeding is practised in the location. In the 1930s national newspapers showed rundown shacks and kids barefoot in rags. It created a lasting impression on the people hearing about it that West Virginia is a backwater.

They became the stereotypical hillbillies and also incest served as a scientific explanation for the downtrodden social condition. Now in West Virginia, there is an anti-incest law but in other parts first cousins can marry. It is still unclear whether the family is inbred or not but they are living a secretive life that is for sure. Mark has started a GoFundMe campaign for them and they get the money from that. They are not having any jobs to support themselves. Now they have become old too.

Inbreeding laws are made to prevent inbreeding among people. But still, this dangerous practice is going on and shocking many people.