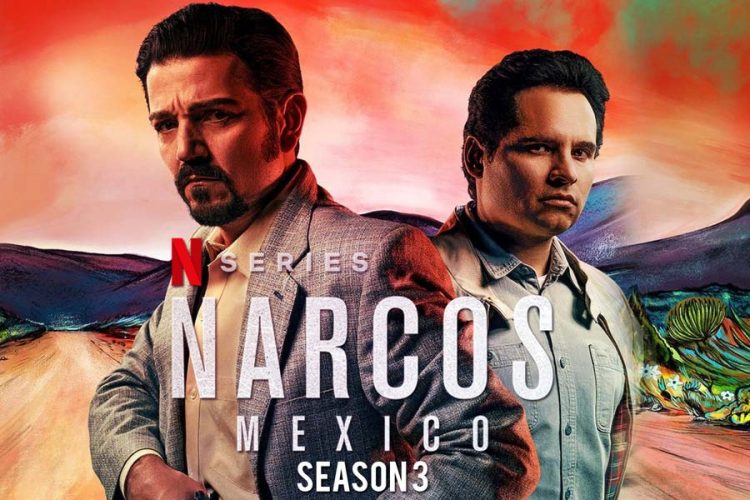 Narcos: Mexico is a crime television series on Netflix. The first episode of the series premiered on November 16, 2018. The series was actually created to serve as the fourth season of Narcos but then it released as a companion series for it. The creators, as well as the producers of the series, are Chris Brancato, Doug Miro, and Carlo Bernard. The series traces the illegal trade of drugs in Mexico. There is also a second season of the series released on February 13, 2020.

Now there are talks of a third season and the fans are eagerly waiting for the new season to release. You can find all the things about Narcos here.

When will Narcos: Mexico Season 3 release on Netflix?

Three months have gone by after the premiere of the second season of Narcos. There is still no announcement about the Narcos: Mexico Season 3. The original series Narcos has five seasons totally and it is still a popular show in the Netflix platform. We can expect the series to return back after some months because of its popularity and great scope for furthering the plot.

Eric Newman the showrunner shared that he has hopes about the return of the show. As long as the people involved in drug business wage wars it will continue. He also stated that they are discussing the introduction of more wars.

There is also the issue of on-going coronavirus pandemic and we cannot expect any new announcements at this time. There was a gap of fourteen months between the first and the second seasons so following the same pattern we cannot make a decision at this time because of the pandemic. This time the series may take longer to release. If there are any updates we will share it here.

The storyline of Narcos: Mexico Season 3

The series Narcos: Mexico deals with the beginning story of the war on drugs. This traces the time when the Mexican drug traffickers were loose on the road. The organization also was not properly organized so there was confusion. The presence of the small-time cannabis growers and dealers are also depicted. The series showcases the rise of Guadalajara Cartel during the 1980s. The man Félix Gallardo organizes the traffickers in the area to create a massive empire.

In the meantime, agent Kiki Camarena of the Drug Enforcement Administration arrives from California to Guadalajara for his new post. Then the agent learns that he has to work hard to put an end to the atmosphere in the place. He also finds it challenging.

What will season 3 reveal?

Felix Gallardo is now in the hands of the authorities. So in Narcos: Mexico Season 3, we will see the investigations of the experiences of Amado. This will tie with Lord of Los Cielos. It is also clear that Amado Carrillo Fuentes is at the threshold of murdering his chief who is Rafael Aguilar Guajardo. He is the person who manages Juarez Cartel.

We will also be able to see how Gallardo was able to create and construct the humongous empire by the technique of using the airspace from Columbia to Mexico for the purpose of transportation of the drugs. In the series, the drug lord Gallardo called the “Lord of the skies”. This is the nickname he earned because of his careful transportation of drugs through the jets. More interesting events are in store for the audience.

There is also Felix who is angry with his adversary Walt and telling him that by getting to him he has made a big mistake in his life. He tells that now his adversary will know the danger of breaking a cage. All the animals are going to run free. This will lead to more explorations in the Narcos world. This means that there are still more cartels to eliminate and when one gang gets trapped others break loose. This is the main concept of the series.

If one enemy gets vanquished many others rise to lead to lots of confusion and drama. The next chapter in the drug war will be even more dangerous than the previous ones. The main protagonist of the series will get tangled in a spider’s web and when he tries to uncoil the web he gets stuck in it.

As Gallardo one of the main villains of the series is behind the bars we can expect the story to focus on Amado Carrillo Fuentes. He will get the full power of Juárez Cartel after killing his boss Rafael Aguilar Guajardo.

As some of the cast members’ purposes in the series are no longer required they may possibly not return. For instance, Felix Gallardo is present but he is in custody for the murder of Camarena. We can expect Scoot McNairy to reprise his role as DEA agent Walt Breslin because he is one of the fictional characters in the series. He is the representation of many agents who have worked hard to stop the illegal activities of drug empires in the world.

Flavio Medina may also come back as Juan Abrego who belongs to the Gulf Cartel. It is a notable fact that Abrego was a well-known player in the age of 90s and 20s. There is also an expectation for the return of Alejandro Edda who is the leader of Sinaloa Cartel.

What happened in season 2?

The season 2 featured Walt Breslin, DEA official looking for the shreds of evidence left by Kiki Camarena. This agent was eliminated by the bad people in season 1 of Narcos: Mexico. The episodes of the Narcos: Mexico season 2 showcased the power elements in the domains and empires. It also clearly depicted the capture of Felix Gallardo by agent Breslin.

Marcos: Mexico is the depiction of the rise and fall of many large drug empires in the world. The origins of the empire presented in detail. It is impressive the way the network works and how actively the agents pursue the drug lords and finally get to them. Season 3 of the series is going to be impressive as well as thrilling.

Also read: Who is Noah Schnapp Dating? Is She Stranger Things Costar?